Ralph's man in Scotland has ventured over to the West Coast and on arriving at the venue, The Berkeley Suite in Glasgow, leaves the Scottish sunshine for a night of darkness.  A slick hideaway situated in between a few bars and restaurant's, the former 1940's ballroom was re-discovered and restored.

It still has many of its vintage features like the original ticket booth counter, decorative windows and grand marble staircase leading down in to the dark and slightly seedy lounge area with it's burgundy walls, gilded frames and low lighting.

A perfect setting for tonight’s evening of dark Electronica, the promoter already setting the mood playing cool vinyl.  Picture the scene from David Lynch's 'Blue Velvet' well this looks like that club but with Tennents on draft.

First up we get Fiona Soe Paing starting her set which is also a visual treat.  It starts with her artistic images taking us in to her world titled 'Meet Me Where The Rainbow Ends'.  It's nothing like Oz I’ll tell you, Dorothy would have been disappointed.

She moves in to stand to the right of the screen, gently easing in to the mic, her vocals floating with her trademark Burmese lyrics reminding me of Massive Attack's Horace Andy.  It's a trance like experience with trippy visuals and electronic soundscapes floating along.

The set has no stop and starts so it's almost seamless as the journey continues, with Fiona Soe Paing building up the pace with stand out tracks 'Behrot' - which reminds me of the early 90's Depeche Mode instrumentals - Interludes and Recoil at their finest.

'Daymoon Sun' which is on her excellent E.P 'Tower of Babel' has a growling Grace Jones-like vocal delivery and John Carpenter synth sounds - very atmospheric. The visuals take us in to an apocalyptic aftermath with a strange freaky looking baby among the darkness. 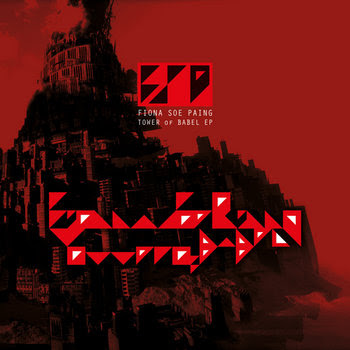 Next the title track 'Tower of Babel' with it's pulsating and hypnotic beats and swirling vocals.  On the last tune 'Roller Ghoster', the visuals put us sat in a long boat on a roller coaster like a nightmarish Willy Wonka ride.  The visual takes us full throttle, up and down - while Fiona screams and screeches.  The ride never comes to an end, it just finishes with a ghostly apparition, could this be the end of a life meeting it's maker?  Who knows!  But I like it. Stunning set and animation by the imaginative and talented Zennor Alexander.  Something very different and highly recommended.

It's a real shame that the organizer's of this great night, perfectly matching Fiona and Pumajaw had a very poor turn out.  It's a hard one playing on a T in the Park weekend and it being a hot day but it doesn't stop tonight's headliner's Pumajaw from giving it all.

Lead lady Pinkie Maclure dressed in black takes control of the keyboard intro while John Wills picks away at his Gibson Epiphone Swingster.  Pinkie seduces us in with opening tune 'Tallulah' as she swoons side to side singing like Shirley Bassey trapped inside a David Lynch movie.

'Your Arms, Your Arms' is very trip hop Portishead-stylee, sounding, very cinematic and like an imaginary soundtrack to a black and white French thriller.  She flits between keys, the mic and a concertina.

'Frozen In Sleep' could be a bond theme tune directed by Quentin Tarantino all backed up with a Angelo Badalamenti score - I imagine anyway.  Pinkie now easing in to her role of dark cabaret singer, like a cocktail of Edith Piaf and Ella Fitzgerald - very animated, drawing us in while John picks delicious melodies.  Into the track 'Mask' Pinkie leans in to the audience staring, picking us off one by one and I hear in my head 'Be afraid, she knows where we live'.

At this point Maclure tells us about their upcoming 'Song Noir' run at the Edinburgh Fringe in August .  They introduce one of the tunes which will feature in the show, it's a night of songs from Noir and cult movies.  She sings the theme from Night of The Hunter - the 1955 Robert Mitchum classic.

She asks if we want another one, we're too scared to say no. They proceed with the stunning 'The Mazy Laws' from their excellent album 'Demonmeowmeow', Pinkie lowers her voice to a more baritone style not dissimilar to Anthony and the Johnsons lead man.  The song builds, it's exciting, electric, pinkie let's lose giving out bursts of screams while John frantically hit's hypnotic notes on the keys while slapping his guitar for effects.  Love it.

We're introduced to another from their new show, from the Lynch's 80's dark murder thriller series Twin Peaks the Jimmy Scott number 'Sycamore Trees' - by mid song I’m imagining a mad wee man appearing from behind red drapes dancing along.

Unfortunately the set is cut short by technical failure on John's lap top, maybe the curse of 'Twin Peaks Bob' had sabotaged it.  A real shame, but never mind I can catch them again, so can you at Summerhall from August 2nd.

Their music is exquisite, electric, dark  and guaranteed to give you nightmares - but well worth the sleepless nights.  A must see live experience.

Posted by Fruitbatwalton at 5:16 pm