Tracks from the Top Ten Blogged Bands are played


every Sunday 5-7pm on Radio KC as part of
Ralph's Indie Show.


LISTEN TO THIS WEEK'S TOP 10 HERE

No 1: The Phantom Sound

The Phantom Sound aka Marisa Schlussel is exclusively premiering her new song which is called, Voices here on Ralph's Life. It's from her upcoming second album currently being recorded with Ken Stringfellow, who is producing once again.

The album will feature Dale Crover of The Melvins and Nirvana (Bleach), and Brian Viglione of The Dresden Dolls and Scarlet Sails on drums. 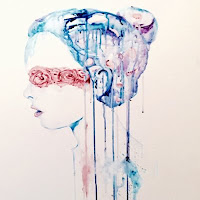 Ralph's been looking at all the bands and artistes playing at this year's Blackthorn Festival in July and featured them all in one big blog, but there's a few which we'll be taking a closer look at over the next few weeks.

One such band is Luna Rosa who hail from Corby in Northampton-shire. Formed in 2014 Luna Rosa have played up and down the UK racking up over 200 gigs in just over two years, including headline and festival slots. 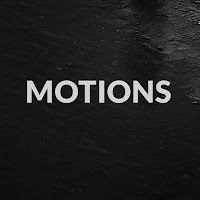 Motions are an alternative rock band based in Dublin formed by Tom Daly and Dave Nulty in late 2015.

Last year saw the release of their well received debut single Back To Where I Begun and the band have; unsurprisingly, been drawing attention worldwide with major industry interest in the UK & US alike.

It's hard to believe that it was as far back as 2013 when Ralph first came across Feral Five and they donated a track to the Ralph's Life CD for the mental health charity Rethink.

Nearly four years down the line, Feral Five have produced another 'banger' of a CD and March 31st sees the official release of Man Cat Doll Machine (I'll forgive them not calling it Man Dog Doll Machine) with some splendid artwork by Tracey Moberly who's previously collaborated with Banksy and Bill Drummond. 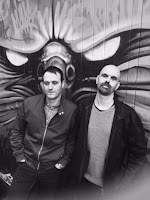 Ralph's recently encountered the musical stylings of  Stocksnskins who are post punksters who seem to render poetry via electronic music. Ralph decided to have a quick word to find out.

"We nod towards post punk electronica mixing lots of beats and bass with poetic spoken word and the odd rants. We formed in May 2016 in Bournemouth. and have been played on the Neil Lomax Teenage Kicks radio show a few times and supported Endea at Sound Circus, Bournemouth." 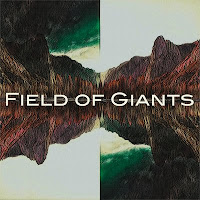 In Ian George Katalina Kicks also have a songwriter who can’t help but use his band as a platform to air his anxieties about the world around him.

SOCIETY is a 3 track EP which is the debut release from Nairn resident Mia Mackintosh. Her ability to mix soulfulness and melody with a harder edge to her guitar playing has led to her music being compared to a range of artists such as Tracy Chapman and The Cranberries.

After her achievement of winning the Moray Firth Radio One to Watch award in 2016, she recorded 3 of her own songs with acclaimed producer Marc Clement and is delighted to be able to present them as her SOCIETY EP on the 28th of April 2017.

The In The Garden EP will be the sixth Scott Lloyd release to date and covers insightful themes such as getting older, childhood, mental health and loss. Normally a solo performer, Scott has used a full band to back him on the EP, which is a step away from his previous acoustic sound. The EP was recorded at Limefield Studios, Manchester in July 2016 and will be released independently by Scott.

Off the back of their debut EP If You Feel Like It, SKIES went from strength to strength last year. With support from Radio 1 DJ’s Huw Stephens' and Phil Taggart's, online plaudits from Clash, Q, TMRW, Punktastic, and regular backing from Abbie McCarthy of BBC Intro Kent.

They took to the road with the likes of Clean Cut Kid, Coasts and Get Inuit , culminating in SKIES seeing out 2016 in perfect style with a jam-packed headline show at Camden Assembly.


Posted by Fruitbatwalton at 4:01 pm No comments:

Music From The North 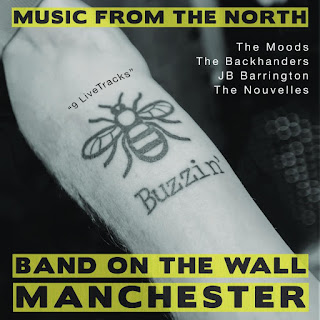 Ralph occasionally strays from the path and rather than focus on an individual band or artiste, will feature an event, festival or release by an independent record company.

Such is the case with today's blog as we're having a look (and a listen) to the release on A1(M) Records of the Music From The North EP.

It's a 9 track EP featuring the music of The Moods, The Nouvelles, The Backhanders and the spoken words of North West poet extrordinaire J.B. Barrington recorded live at Manchester's reknowned and eclectic Band On The Wall venue in the Northern Quarter's Swan Street.

The Music From The North EP; mixed, mastered and produced by award winning producer Dave Tolan in his Hope Mill Studio, is officially available on iTunes and limited edition (300 copies) CD (dedicated to Yvonne Doyle) from tomorrow.

The Music From The North EP had an exclusive on-air debut on Wednesday night, during a special episode of Steve Doyle's Sonic Diary on 94.4FM Salford City Radio. A1(M) Records will be donating copies of the Music From The North CD to the radio station, who will in turn sell them to their listeners in aorder to raise funds towards the much-loved station's ongoing fight for survival.

Ralph will be featuring tracks by the bands on the EP in next Sunday's Indie Show on Radio KC.


Posted by Fruitbatwalton at 9:39 am No comments:

In Ian George Katalina Kicks also have a songwriter who can’t help but use his band as a platform to air his anxieties about the world around him.

“I would never pigeonhole us as a ‘political band’,” he explains. “I just write about things I see and hear that upset me. We’re not preaching at anyone or trying to change the world. We’re just saying these are the things that affect and worry us. They’re too important not to talk about, whether in conversation or in rock’n’roll. That’s all we try to do.”

Their new album, Vices is set for release next month and presents Katalina Kicks at their loudest, scuzziest and most politically aggrieved yet. But then opening with a 'cameo' from Donald Trump, how could it not be? The Seattle-sized quake of Guns was written after watching Obama’s tearful reaction to the Sandy Hook school shooting.

“It’s a song of despair,” says Ian. “The most powerful man in the world, and even he can’t stop the gun madness in his own country. And then after the Paris attacks, Trump said that terrifying quote about if people had guns, less people would have been hurt. So we sampled that just to show the absurdity.”

The ten tracks of Vices are reassurance to anyone fearing that contemporary rock may have lost its conscience. In their musical echoes of the past, Katalina Kicks speak volumes about our present. A volume the world needs turning up louder than ever.

Posted by Fruitbatwalton at 4:12 pm No comments:

SOCIETY is a 3 track EP which is the debut release from Nairn resident Mia Mackintosh. Her ability to mix soulfulness and melody with a harder edge to her guitar playing has led to her music being compared to a range of artists such as Tracy Chapman and The Cranberries.

After her achievement of winning the Moray Firth Radio One to Watch award in 2016, she recorded 3 of her own songs with acclaimed producer Marc Clement and is delighted to be able to present them as her SOCIETY EP on the 28th of April 2017.

SOCIETY is available on iTunes, Google Play, Spotify and more from tomorrow and Ralph's giving I Will Be Good it a spin on next Sunday's Radio KC Indie Show.

SOCIETY is an excellent fist dip into the music of Mia Mackintosh and lead track We R Mysterious shows a songwriting maturity beyond her tender years. That being said I Will Be Good is; for me, the more radio-friendly of the three tracks on SOCIETY whilst the poignant She's Resting With The Best Of Them immediately connected with me as a listener.

Mia Mackintosh is writing contemporary songs with an old soul and I for one can't wait to hear what she has to offer as a follow up to SOCIETY. If you're up in Inverness on May 14th you can catch her live in The Ironworks supporting another hugely talented young Scottish singer/songwriter Tamzene.

Mia Mackintosh taught herself guitar after taking an interest when she was 10 years old. After losing two of her grandparents when she was 12 she started writing her own songs as a way of dealing with her emotions.

Supported by family and friends she started performing live in 2014 and by 2015 she made it to the last 16 in the Belladrum Festival Bellas Got Talent competition.

Mia Mackintosh has participated in the Scottish Music Centre’s Music Plus project in 2016 and aided by their mentoring scheme, started working with Marc Clement who has collaborated with many great scottish musicians, performed extensively as an acoustic guitarist and pianist plus was a founding member of Blazin’ Fiddles and a member of Session A9.

“Music Plus has been great. I’ve learned a lot, and learned there is a lot more to learn. Collaborating with Marc Clement as producer has been a real eye-opener. He has added real depth to my songs“

Posted by Fruitbatwalton at 3:18 pm No comments: