“Tune into Autism” with PLUM, SOLAREYE and GEORGIA SMITH
The Voodoo Rooms, Edinburgh - Wednesday 29th May

Continuing on the success of Scottish Autism’s “Tune Into Autism” initiative in 2012, a new series of gigs for 2013 are kicking off all over Scotland. The May event at The Voodoo Rooms in Edinburgh will feature Ralph's favourite Plum, aka Shona Maguire, the multi-talented songwriter and producer who has recently won the Scottish Alternative Music Award for best electronic artist.


Plum is renowned for her quirky, touching and intricate sounds, created using a combination of samplers, synth, keyboard, bass, guitar and voice which has earned her a loyal following throughout the UK and Europe.

The second act of the evening is Solareye, the highly entertaining frontman from another of Ralph's favourites StanleyOdd (guess who got my vote in the SAY Awards this year), who applies his hilarious and thought provoking Scottish rap and hip-hop to focus on political and social issues.


Doors open at 7pm. Tickets are £7 and can be bought from Ticketweb, 01259 720044 (Scottish Autism) or at the door and all profits will go to Scottish Autism for music therapy.

Tune into Autism is an initiative that raises funds for music therapy and is spearheaded by four volunteers (Hannah Currie, Angus McGuire,Leanne Mabberley and Ian Harrower). After a hugely successful launch in 2012 the team are rolling out class acts for the forthcoming year in order to support Scottish Autism's on-going music therapy programmes.

Carolyne Nurse, Fundraising Manager for Scottish Autism said, “We are delighted that the Tune into Autism programme is so successful and huge thanks must go to the hard-working volunteeers and musicians who understand how important and beneficial music therapy is to those on the autistic spectrum. These events raise much needed funds for music therapy and help to increasing awareness and understanding of autism."


Further “Tune Into Autism” gigs are being planned this year which include Falkland Village Hall in July and The Stand Comedy Club in Edinburgh in October.
For tickets go to http://ticketweb.co.uk or Tel: 01259 720044 (ScottishAutism)
Posted by Fruitbatwalton at 2:12 pm No comments:

Ralph's a supporter of all things Indie so when he saw that Rufus Guitars who are a British guitar maker based on the Wirral offering to endorse Indie bands he was intrigued.....

Their guitars are hand-made in a studio-workshop in Oxton and they try to use as many British parts and materials as possible.  This includes Tangent Pickups and selected wood grown and seasoned in the UK.  Every guitar they make is named and numbered and comes with a certificate of authenticity.

Sean- "I started a guitar company because I wanted to work doing something that I loved - which really means that it isn't work at all! Being quite selfish, I decided to make guitars that I wanted to own and play."

"My aim is to make your 'go to' guitar, the one you always pick up, the one that feels comfortable, the one that provides you with your greatest inspirations and the one that you get your best tunes from."

"I never had any ambition to make expensive guitars, just good quality ones from British woods. Hopefully, after years of use and abuse, your Rufus may be battered, bruised or covered in stickers, but you will still love it and still play it every day."

One of the artists endorsed by Rufus Guitars is Lem Mellor who plays a Rufus Radian with Tangent Double-Core pickups.  Lem is an experienced musician and engineer who created Angel Valve Studios based in Birkenhead who also offers songwriting tuition and instrument tuition across a wide range of instruments, from all manner of guitars and bass to ukelele and banjo. He is also proficient on keyboards and has sessioned on various tracks for those recording.

Sean - "Many commentators state that wood variety has a significant effect on the sound, so we decided to see what differences we could find with samples of woods that we have used; these were Cherry (UK grown), Lime (UK grown - this is also know as Basswood and Tilla), Pear (UK grown), Sapele Mahogany, Soft White Pine and Sweet Chestnut (UK grown).

"We wanted to get a feel for the resonant nature of each wood type - did it 'ring' or was it 'dead'?"

"We quite naturally expect that different wood types give rise to different sonic characteristics and this is something that we lean from childhood in our every day experience. However, exactly how a wood variety affects a guitar's sounds and feel is not so obvious; we would have expected that the density and porosity of the wood would have an effect, and whilst it does, it didn't to affect the "ring" of the wood."

"Cherry had the greatest density and equal with Pear for it's ability to ring.

"Lime (Basswood) low density but a good ring, use in budget and mid-range guitars

Sapele Mahogany oddly disappointing resonance since this is used in some very expensive guitars, and almost indistinguishable from Lime (or even Pine!). for resonant but slightly denser."

"Softwood Pine is not really a traditional wood for electric guitar production as it's low in density but otherwise comparable to other woods for resonance, with a nice ring.

Sweet Chestnut has the lowest density in the test but had a nice ring to it - would make a very lightweight, if rather soft, guitar body with a characteristic ring."

Another artist endorsed by Rufus Guitars is Lee Wylding of The Fireflys, who have been No 1 in Ralph's Top Ten Blogged Band Chart for the last five weeks after the release of their third album 'Embers Of The Autumn'.  When asked about his Rufus Infinity, custom made from Scottish Elm Lee had this to say -

"I'd been looking for good quality, British made guitars for years and to be honest, although there's a few around, I didn't find one that was truly 'me' and catered for my varied guitar style - until now - the Rufus Infinity custom is what I've been waiting for all my life.  It really is a work of art."


So there you have it, a UK Indie guitar company looking to endorse UK Indie musicians; whilst I have no technical knowledge of guitars whatsoever, they look extremely sexy so if you're on the lookout for a new guitar, want to be associated with a company that cares and like the look of what you see get in touch with Sean at Rufus Guitars now!
Posted by Fruitbatwalton at 11:57 am No comments: 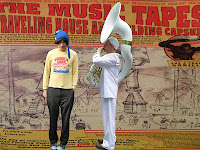 So here's something a bit different as Ralph brings you the phantasmagorical world of The Music Tapes, Julian Koster of Neutral Milk Hotel and Robbie Cucchiaro of The Olivia Tremor Control who have created an experimental pop music and performance art project like no other and they are bringing it to Scotland for the first time with some dates this June featuring Scottish artists in support, including Washington Irving, Panda Su, Eagleowl and Duncan Drever.

Following Ralph's look at Doune The Rabbit Hole recently word just in from them was they're hosting Julian and Robbie who have spent the last five years bringing The Music Tapes' legendary live shows to living rooms, opera house stages, and everywhere in between - along the way garnering an ever growing legion of devotees enthralled by the band's imaginative and uniquely affecting blend of music, magic, storytelling, and games that collapses the boundaries between pop experimentation, theatre, and performance art.

The Music Tapes live show pushes the boundaries of what audiences have come to expect from an ‘indie rock’ band - performing alongside mechanical contraptions like the 7-Foot-Tall Metronome, a mechanical organ tower and a singing television. They couldn't find a seat on the plane large enough for the metronome this time around, but Static the singing television is looking forward to joining Julian, Robbie and organist Andy on this, their debut trip to Europe!

The band has recently been taking their Travelling Imaginary Circus Tent tour across the US and June 24th  sees the European release of their album ‘Mary’s Voice’ through Merge Records. This, The Music Tapes' third full-length album, is the warmest and most accessible invitation yet into Koster's world - the culmination of a vision he has been realizing for over a decade.

Doune The Rabbit Hole’s mission to make Scotland happier and bring art and music to everyone stretches beyond the main festival event at Cardross Estate 22 - 25th Aug.

The dates take place at the following venues:

Tickets are available from this link: Doune The Rabbit Hole 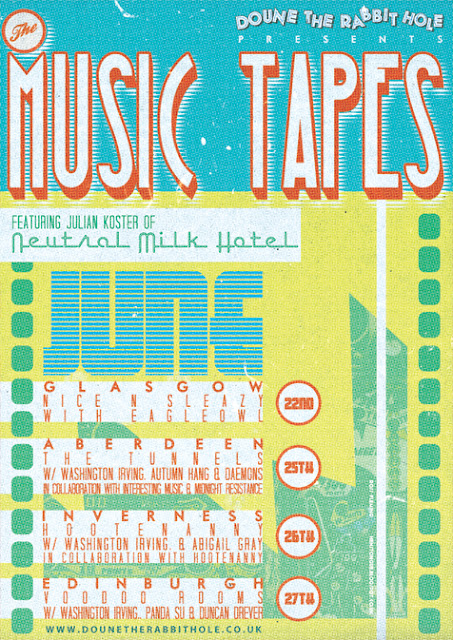 Posted by Fruitbatwalton at 2:41 pm No comments:

Always one for checking out the local radio stations to find out what's hot music-wise in the North West, Ralph's had his ears on WA12 Community Radio Station in St Helens.  One of their top recommends currently is Warrington born singer songwriter Dan Solan and his band as they've just released an album of fine tunes.

Dan was raised between those two great capitals of the music scene, Manchester and Liverpool. From an early age music became the main focus in his life.  Composing his own songs at the age of 15, the musicality of his songwriting, strength of his arrangements and the power of his performances were apparent.

Extraordinarily prolific and imaginative, he is constantly evolving his art and continues to write new music at an impressive rate, while gigging across the North West of England both as a solo artist and as part of a band.  Dan's influences include Coldplay, Radiohead, Elbow, Snow Patrol, Jeff Buckley and Ed Harcourt, but his style is truly his own.  The new album has been produced by Mercury Award nominated producer Andy Ross and the new cuts are already creating something of a stir.

BBC Introducing Manchester will be featuring some new tracks and Dan has recently been interviewed by ALL FM's Sophie Svennison on her new drivetime show, as well as appearing on a live radio show for Storm FM in Bangor, Wales.  With rapturously received gigs, ever expanding crowds, and over 3000 plays on soundcloud within 2 months, this is an artist whose trajectory is rising inexorably to greater recognition and success.

With well crafted, often poignant and soul searching tracks like 'Give Me Today' Dan Solan will take you on a musical journey with the new album that you wont want to end.

Whilst you can hear traces of his musical influences in his music, he's very much his own man.  There's gigs upcoming and the line up of Dan's band is Dan Solan - Lead Vocals, Rhythm Guitar, Steven Kent - B/Vocals, Lead Guitar, Chris Bright - Bass Guitar and Karl Hand - Drums.