Everyday Goldfish.....scaling the ladder of fame....

Now it's not every day a goldfish brings out an EP so Friday 26th October was a big date for young Manchester band Everyday Goldfish who released their first EP, the aptly named 'Eyes On The Prize' at The Candence Cafe Tyldesley that very night!  The band are Alex Haslam, Jack Binks, (why do I imagine his nickname is Jar Jar) Laiton Price, Lee Whittingham and Lewis Tooby.  They are the epitome of shiny bright young things as they've only recently left school and have their eyes set firmly on climbing the rock ladder (see how I cleverly avoided 'Stairway To Heaven') to fame and fortune.

The 'Eyes On The Prize' EP has three tracks which are now available for download but if you're lucky enough to lay your hands on one of the hard copies there's a 'secret' bonus track.....I forget what it's called.....oh yeah.....'Amnesia' which Ralph has heard and all I'm saying is it's worth getting your hands on the hard copy just for this track alone.....just a hint of The Skids.....

By way of a taster I will give you this little snipette from the EP called 'Uncle Joe'.  It's a hard driving rock track with punk undertones which belies their tender years.


The other tracks are 'Beautiful Girl' and 'Just Smile' which you'll just have to go and download the EP if you want to hear them but I can assure you, you will not be disappointed.  If you were in or around Tyldesley on the 26th and got tickets for Everyday Goldfish's EP launch night, you'll know it was be a stormer - oh and the EP hard copies were on sale.....kaaaaching.....

Well the EP launch has come and gone and thanks to a bit of guest reviewing by Denise and Steve of Creely Photography in Irlam, Manchester.....Ralph can bring you a no holds barred account of the night (they took the pics too).....


The newly opened Cadence Cafe was the venue on Friday of Everyday Goldfish, EP launch - Eyes On The Prize.

We've been working with the band for a couple of years now, photographing them during rehearsals and at various gigs around Manchester, and we've witnessed, at close quarters, how the guys have developed into one of the best new Rock Bands in the North West.  The Cafe was packed to the rafters when we arrived and there was a real buzz amongst the crowd who had turned out to see EDG and were eagerly anticipating the band's arrival on stage.

This gig sees them come of age with a set list of their own material, with a couple of crowd-pleasing covers thrown in as encores (the crowd were vociferously demanding more & were reluctant to let them leave the stage).   They play with a confidence, energy, swagger & muscianship way beyond their years.  EDG had the young crowd eating out of their hands, the place was in raptures by the end of the set and their was certainly a lot of love in the room for Everyday Goldfish.

Their boy band good looks, belies their hard rock and indie influences.  Their EP songs, Amnesia, Beautiful Girl, Uncle Joe and Just Smile shows genuine talent in their song writing abilities.  They sound fresh and new amongst so many bands today who tend to sound like everybody else.

Just a mention on the newly opened Cadence Cafe - it is a great venue for new & upcoming bands to showcase their music and will no doubt become the place to see and be seen on the music circuit.


For sure Everyday Goldfish are a band to keep a close eye on - check them out for yourself and you'll understand why, in our opinion, they are on a trajectory to a stellar future!

Big news for today is the lads will performed a 20 minute set in The Marquee Suite of the DW Stadium in Wigan for BBC Children In Need Friday 9th Nov.....and here's a picture hot off the press! 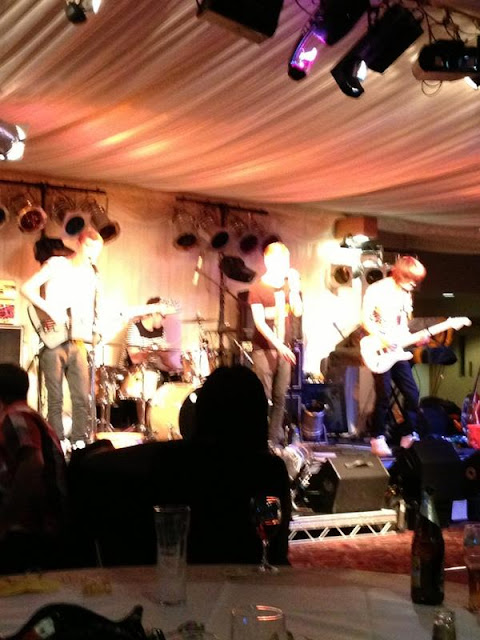 Posted by Fruitbatwalton at 5:41 pm