Piff-tastic....Last of the Magic Dragons

So a dragon that
does magic and
he's got a dog for a partner.....what's not
to like!  Me being a Jack Russell with a 20 second attention span....magic acts are...well...amazingly magic.

I first saw Piff and his little friend Mr Piffles (rescued from Dundee) on Penn and Teller (they were robbed) and followed their career with interest thereafter. He's now an Edinburgh Fringe favourite and his current show is guaranteed (as ever) to be a sell out 5 star success (especially if early reviews are anything to go by).  The YouTube video below hit half a million hits just three days after the show! 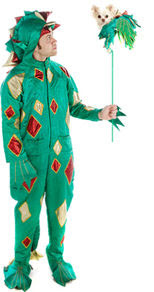 Sadly I can't get up to The Fringe this year, but my best advice is (If you can still get a ticket) catch this extremely funny magic show, for no other reason than to see the one and only Mr Piffles the levitating dog (I've tried and failed but I can play football).  This year the show is called Last of the Magic Dragons, and is about how, as the last of his species, Piff is out to stake his claim as the Greatest Magic Performing Dragon of All Time. Accompanied by Mr Piffles, the World’s First Levitating Chihuahua™, Piff will prove he can dazzle like David Copperfield and reach the height of Paul Daniels.


Edinburgh Spotlight said this about the show.....


It’s hard to dislike a show featuring a disgruntled magician dressed in a dragon outfit. It’s impossible to dislike one which also features a tiny chihuahua dressed in a dragon outfit.
Such is the premise and the appeal of Last of the Magic Dragons, an hour of fun – and impressive – comedy magic from Piff. Bitter, twisted and sober following the acrimonious split from his ex-wife, Piff resorts to his magic for comfort. And as a thinly-veiled attempt to attract a new potential mate, several of whom he identifies as candidates in tonight’s audience.
There’s something endearing about Piff, with his hangdog expression and deadpan delivery – even with his constant attempts to extort money from the audience. And, as the show progresses, the magic gets more impressive and Mr Piffles (the chihuahua) wins over any hearts still left unmelted.
By the end of the show, Piff has astonished the audience with his feats of mindreading and magic; Mr Piffles has charmed in the way only a levitating chihuahua can; and everyone is left amused and satisfied by one of the most original comedy magic acts on the circuit today.

Piff The Magic Dragon has a droll, deadpan style in a Tommy Cooperish stylee that makes you laugh from his first almost reluctant stroll onstage.  As for his magic, it's as skillfull as he is funny, ably assisted by the worlds only million pound chihuahua, the adorable Mr Piffles.

Me and Mr Piffles seem to
have a lot in common


Reviews for Piff the Magic Dragon courtesy of.....The Metro, London, 2011 "Piff the magic dragon was a particular stand out act, blurring the line between magic and surreal comedy. Dressed in a dragon suit and with a Chihuahua in tow, Piff was a million miles from the slick, schmaltzy, rolling-up-the-sleeves style of magic that seems a little out dated now, and his routine would have been as welcome on a small stage at a comedy festival as it would a Vegas stage." ArtsHub, Perth, 2011 "If theres one show that is genuinely side-splittingly funny and lives up to its hype this Fringe World season, it's Piff-Tacular 2: Get Rich or Die Trying - so go see it!" Stage Whispers, Melbourne, 2011 "The magical masterpiece of John van der Put... funny and forlon... Piff stands out not because of the gimmick of the dragon costume, but because he is, in a word, Piff-tacular." Australian Stage, Melbourne, 2011 "Van der Put is a fast-thinking, witty comedian, obviously able to keep an audience on its toes and respond to the nuances of an individual crowd on any given night. He's fun and irreverent and the show has a great blend of stand-up comedy and magic." Edinburgh Spotlight, 4 Stars, Edinburgh, 2010 "A great line in dry, self-deprecating and offbeat humour¦ This particular journo was laughing too hard to take any notes, which seems perhaps as good a recommendation as one could give."

Piff the Magic Dragon on WhoSay
Posted by Fruitbatwalton at 2:07 pm