The Verdict.....they're the answer to your prayers What does..... The Cavern Club in Liverpool.....The House of Commons in London.....Alice Cooper..... MP for Walton Steve Rotherham and Deep Purple's Ian Gillan have in common?

They won the government backed Rock The House Competition, held in the House of Commons, which is sponsored by The Cavern Club and whose patrons include rockers Cooper and Gillan after being put forward by their local MP Steve Rotherham!

Why did he put them forward I hear you ask.....well it's obvious, quality indie/pop tunes like '24 Hours'.

It's a little anthem of a 'Power Pop' tune. A crowd pleaser and a teaser for what's to come.

'Days are Speed' has hit written all over it.  It's got an Aztec Camera feel to it, nice choppy Roddy Frame like guitar running through..... definitely one to get the joint jumping!


If you're looking for something a bit heavier then the meaty 'Something I Said' is for you.....great drums n bass running through it.....one that got this Jack Russel's head noddin'.

The Verdict style themselves as 'a big guitar, throbbing bass and pounding drums kind of band' and they're not far wrong.

Here's a link to the video of their recent set at the Liverpool Mathew Street Festival.....

The band consist of Gaz Wilcox, Josh Ferrigan and Kev McKay and given their recent success it's not surprising they have their sights set on bigger and better things for the band.

If you want to hear all their demo's you can listen to them at The Verdict Bandcamp page.....

The've got some big gigs coming up, none more so than  the HJCLondon Rocks night.

The Hillsborough Justice Campaign (HJC) is a non-profit organisation supporting the families of the 96 Liverpool fans that died on the 15th April 1989 in the Hillsborough tragedy and their continuing fight for Justice. HJC Website 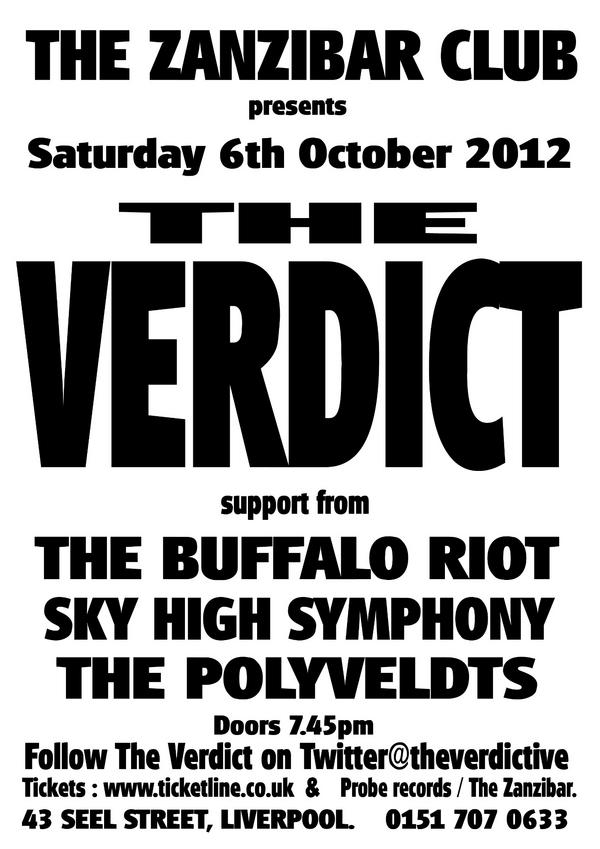 Posted by Fruitbatwalton at 11:26 pm