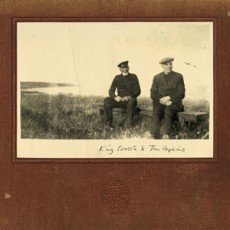 So here's my choice in the SMIA Scottish Album of the Year Awards, and the great news is it's been shortlisted!

King Creosote & Jon Hopkins
Diamond Mine took seven years to complete, and even then there was no real deadline to meet, no budget to work within, and absolutely no pressure to deliver anything other than a soundtrack to a romanticised version of a life lived in a scottish coastal village. They scoured the KC catalogue to find the songs that best suited their physical origins, the ones that weighed enough to anchor a sound in the East Neuk of Fife, the ones that had aged so well that they hadn’t aged in the slightest and for once, they recorded the voice well clear of winter colds, summer hay fever, spring tour strain and autumn festival fatigue.


If you're in the mood for some mellow music then waste no time and buy it, but in the meantime go have a free listen to 'Bats in the Attic' on the Scottish Album of the year award website.  Feel free to let me know what you think and 'hey, lets be chillin' out there'.
Posted by Fruitbatwalton at 10:53 am