Ralph's man in Scotland Malcolm Parry brings us news of Broken Records latest home gig.....The last time I bore witness to the live antics of Broken Records was a few years back at The Connect Festival in Inveraray as they headlined a stage for up coming bands next to the real ale and whisky tent. I shunned the main stage to take in a few 25 yr old malts while this Edinburgh band provided the soundtrack to a perfect Scottish evening.

Remembering the first time seeing them live, supporting Twilight Sad I was blown away by the sheer energy from the band, all musicians throwing themselves around the stage. This time Broken Records lead man Jamie Sutherland takes the stage announcing to the packed venue - “This is a friends and family gig” - and - “Tonight is a new song Extravaganza”.

I'm looking around at the busy, hot venue and can tell there's a lot of die hard fans glad to see their local band back on the live circuit. As member Craig Ross explained afterwards to me  - “Two of us have been away with our partners having kids, so it's been hard to get us all together.”

The band are fired and up for it, so are the crowd. Straight in to 'Weights And Pulleys' and to me Sutherland's sounding uncannily like fellow Auld Reekie musician Paul Buchanan of The Blue Nile likewise on 'Ditty' which came later. Already we're in good company and the vibe again is warm and energetic. I'm feeling the Arcade Fire comparisons and 'Keep The Car Running' drive on 'Winterless Son' and 'A Leaving Song' lifted from their last album. 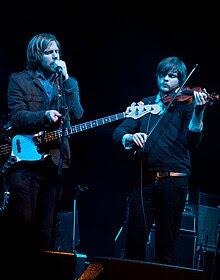 Not surprising with a live 7-piece band, strong hold and new to the line up is trumpet player called Steven who provides at times a 'mariachi' feel and echoes of a James- Seven period. Jamie Sutherland's vocal delivery sometimes reminding me of a mix of Bruce Springsteen and Brandon Flowers, especially on 'A Darkness Rises Up' which is very early Killers and nicely uplifting. Jamie is a strong presence, confidently bantering between songs with band members and the audience (even the hecklers). Things at times are slowed down to give us a rest and we hear 'I Used To Dream' and 'A Warning' from the '09 EP 'Out Of The Water'.  An epic 15 songs in before they leave the stage with a rousing almost ceilidh feel to set and finish with closers 'Nearly Home' and 'Until The Earth Begins To Part'. 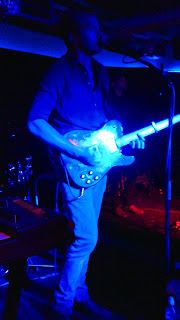 As we all hoped and stomped for, there was an encore - with Sutherland opening the set again saying - “ We're just a humble rock n roll band “ - and continues - “This song ('Leave You In The Dark') we tried to write in a Roy Orbison style". They follow with set closer 'All Else Can Just Wait' the title being a homage to the band American Music Club. Jamie tells us how he spotted his hero (front man of A.M.C) in a Marks and Spencers services station on the M6 but didn't go and say hi as it wasn't the coolest place to meet him.

The new songs have a big and confident sound to them, and Craig again tells me - “There are strings used on the new album but it doesn't sound as big on record, it's more stripped back, obviously with a 7-piece live on stage it does” - he adds - “we hope to get it out early 2014, with an E.P before.”

I ask if there are any more live dates- to which he replied - “We plan some more Scottish dates then go back to Europe, places like Holland and Germany really look after us.”

A great homecoming gig for the lads and their fans, me included who won't be leaving it that long to see them next time. With a strong live band and tunes to carry across all venues from sweat pit's to festival stages I hope to see their name splattered across gig posters in the coming year.

Posted by Fruitbatwalton at 11:04 pm