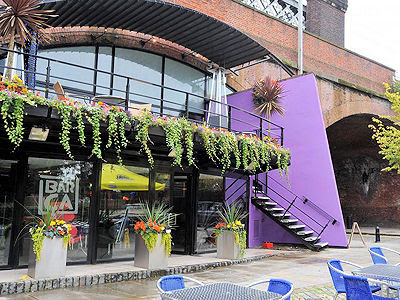 Ralph's jungle drums brought news of a gig in Manchester's Barca, Castlefield on Friday 16th August with a quality line up of local talent that's going to be one not to be missed. Having previously blogged Jess Harwood and Dan Solan it's only fair that he takes a look at John Mackie who's sharing the bill.

A singer/songwriter originally from Glasgow but now residing in Greater Manchester John Mackie's inspirations are from a wide range of varying sources, but his talent for touching, emotive lyrics and ear for melody give him a style that makes him stand out from the crowd. John has been in various bands as creative influence in his career, notably The Broadcast, but now feels the time is right to 'fly solo' and venture forth alone.  Ralph had a quick word with John prior to the night.

Ralph: How long have you been down in Manchester and differences in the two music scenes?

John: I've been living in Manchester I think most of my life now. I came here at 8 years old and aside from the odd visits to family, and gigs I've been on Manc soil.

John: Difficult because Manchester is my home these days but both city's are amazing and offer so much not only in culture but more importantly the music scene. I know a lot of people in Glasgow and have been back on many occasions to gig and tour, it has a place in my heart and always will.

John: Neither I'm afraid, not my vibe, not my era, I've seen more of Ian Brown, and Oasis but now really enjoy Glasgow 4 piece GLASVEGAS with the melancholy sprinkled on top.

Ralph: Do you prefer solo performing as opposed to being in a band?

John: Politically solo - but for rock n roll, a band. I have done the band thing a few times over, seen some countries, made some lifelong friends and made memories I will cherish forever, aside from that I'm a nightmare to work with and don't mind admitting that, so going it alone and only answering to my own reflection is perfect.

Ralph: Any new material - EP or even an album in the offing?

John: I have a small management team on board of recent, so recording is defo in the pipeline, as well as some branding and marketing. So look out I'm sure you'll see me around. Recording is penciled for Nov 2013 in the form of an EP, I'll save my album until I get the backing required, I would rather spend a month in a studio as opposed to a week on a budget.

Ralph: An artist you'd like to be compared to?

John: Jonny Cash, Deffo!!!!! Everything he stands for and the impression he gave was priceless.

Ralph: An artist you wouldn't like to be compared to!

Ralph: What drives you to write songs (a lot of your work seems to be very introspective)?

John: Introspection is examination of one's own conscious thoughts and feelings: in case anyone wonders what that means. I would agree with you there, it seems to be the way it all began, as a form of escape from the real world, a frustrated teenager, but as I developed as a songwriter the songs seem to have evolved like a chameleon, so that they fit everyone's introspection. There is no set system or direction to writing a song, it just comes out, with me it seems to be what I'm consciously or unconsciously thinking at any one time in any one place.

Ralph: Bit of a folk/country (even bluegrass) vibe to some of your music - influences?

John: Only what the Old man played back in Glasgow when I was a child, he liked a bit of country, but also early Johnny Cash, Bob Dylan, Elvis, Jerry Lee Lewis, etc. I think the folky feel comes from my love of the home country as a whole, Its history you know??

Ralph: Finally - looking to expand further than the Manc scene?

John: Already begun my friend, London first, then UK tour, next year Europe and festivals so its onward upward causing some havoc along the way - hahahahaha thanks!!!!

Posted by Fruitbatwalton at 11:36 am