Ralph's man in Scotland, Malcolm Parry first saw SAMA award winner's Culann live in Edinburgh back in April while they were on a double header tour with Mechanical Smile. Unfortunately not a great turn out which was a shame as he really enjoyed their set's, so much so when the band announced a headline show in Glasgow he had to go and see the mighty Culann again.  So notepad and pen in hand here's the skinny!

Back in Edinburgh I got an interview with the lad's on the back of their rightly so win of best rock band at this years SAMA awards. Fast forward to Glasgow and I get a catch up interview with lead man P.J. Kelly who's celebrating his birthday, and what a day for him, just being told the gig has sold out.

Malc: Things have been on the up for Culann since we last spoke?

P.J: Yes, we have been playing live as much as we can. M: More people wanting to catch you guys live? P.J: definitely.

Malc: You just headlined Tiree festival last weekend, was it a great event?

P.J: We got added to the bill as they wanted a rock band to mix with all styles off Scottish music.  It was a great weekend, we had fun.

Malc: What live plans have you got for the rest of the year?

P.J: We play FreckFest in our home town of Irvine in August and then we embark on our headline tour taking in another gig in Nice n Sleazy Glasgow with Duke supporting

Malc: Is this gig the same Promoter as your last tour with Mechanical Smile?
P.J: No, this is a guy who recently started working for Simon Cowell's Syco label but has a wee company of his own putting on gigs from time to time.

Malc: So tell me a bit more about 'Jerusalem' - how did the idea for the video come about, it's very cinematic?
P.J: Yeah,Yeah! It's a fast and frantic song so wanted it to reflect the sound. It's directed by Stuart Breadner and stars local Irvine actor Rab Affleck of 'Big Man' with Liam Neeson and Billy Connolly also 'Gangs of New York' fame and it was filmed in Ayrshire.

Malc: How well has your self titled debut album sold ?
P.J: It did well on i tunes but sold more as a physical copy on C.D, over 200-300 shifted.


Malc: It definitely is worth buying on C.D for the cover alone, would you be putting it out on vinyl?
P.J: Would love too but very expensive to get copies printed.

You can still buy their album as a download or from their Facebook Shop for a physical copy.


Malc: So do you plan to release another single?
P.J: We do then another album is planned.

Malc: So anything else you're excited about, English dates maybe?
P.J: Excited about the gig tonight, a lot of people we know are coming down. The buzz around us is all positive at the moment, so it's all good. The promoter says we'll see how tonight goes and maybe try and get us down in London. 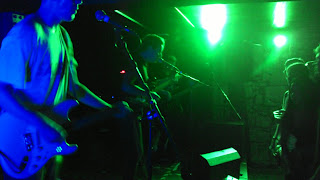 The band take the stage and announce this will be their last gig before they split up and say - “we'll be giving away t-shirts”. The venue is already busy and with them being fellow Irvine boys, a great excuse for the Ayrshire locals to come down and say fair well in true live gig style. The band play giving it all, at times reminding me of Gang of Four and early Bloc Party building up their set to a Rage Against the Machine frenzy.

At the end they throw t-shirts and even a sweat drenched towel in to the warmed up crowd. A shame it's all over for such a young band with tunes and talent but unfortunately some bands have a Sell by date too. 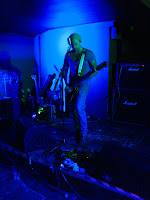 Next up bringing things down is Pariah Soul.  At first sounding all laid back sleazy bar blues, the three piece are very polished. The lead singer/guitarist with a voice that could shred leather and bluesy licks, a tight rhythm section with drummer on backing vocal duties. Then it goes all A.O.R on our ass and starts to lose the audience. The last song gets a reveler with a 'Last of the Mohicans' hair style dancing along at the front.

But fear not, we are here to see tonight's headline act Culann 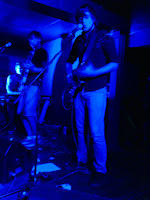 They decide to pull 'Dancing Bruce' out for their opening track. The venue being downstairs on a hot July night is already like a cauldron. A great start with people already singing arms in the air. The very Prog Rock 'The Lowlanders Great Haunted', ripped from their excellent debut is up next. I'm thinking these guys are definitely a headline band, commenting to my pal that you could imagine them up on a big stage at T in the Park - big anthemic sounds - watch out Biffy Clyro their coming to get your title.

Into third track ' Homegrown' the band are feeling the heat by taking off their top's and unfortunately some punters as well who venture out for some air. In between the songs lead man P.J Kelly, very softly spoken but my god when he sings it's an impressive vocal range and loud. A friend comments "what a great voice". 'Beat your Chest' one of my favorite's with it's dirty riff's, massive Deep Purple style melodic keys, shout from the mountain top vocals and meticulous time changes.

The band take time out to get a crowd sing along 'Happy Birthday' to their glorious leader, Kelly smirks and is obviously humbled. The band work through their album and asking the audience what's coming next? 'Jerusalem' is - it sounds loud and menacing but with a melodic charm.

Last song P.J. asks the crowd to be quiet for a second for the start of the song but it's a Friday night in Glasgow, he doesn't get it - 'Friendship and Honour' follows - Kelly turns his mic to the audience - his mates sing lines very badly from the song . The encore 'I Am The Red' which could easily have been a Darkness single collaborating with Yes' Rick Wakeman finishes tonight's hot, hot & sweaty proceedings. My pal who is a man of few words turns to me with a Joker-like grin on his face and said - “I would definitely see them again” - and so would I.  See you in Edinburgh on your next tour lads.

A band who are coming in to their own live with constant touring since the album release and who will be coming to a Scottish town/City soon, if you get the chance- get down people. I went home and cut my shirt off my back. 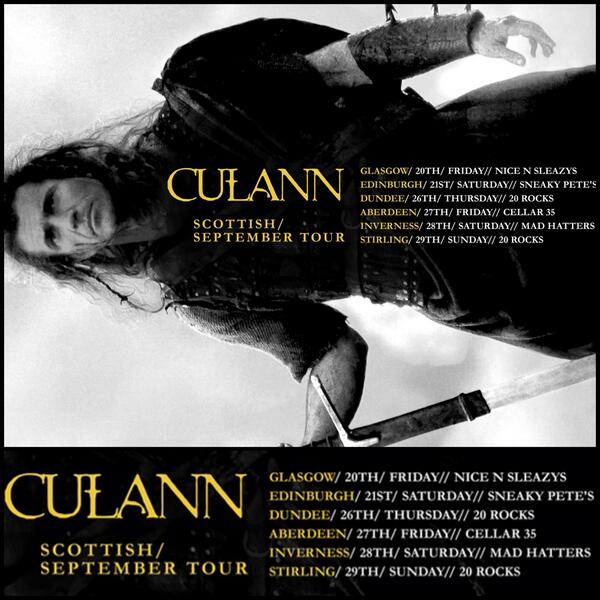 Posted by Fruitbatwalton at 4:31 pm