They're a cool blend of Folk, Rock, Bluegrass and Blues that have Buffalo Springfield, The Stones, CSNY, Oasis and a smattering of Cadillac Sky. Recently they won the Scottish Alternative Music Awards Best Newcomer in Garage Glasgow.....

So I'll let Malcolm tell you just how good they are live, with support on the night from Daniel McGeever, Black Cat Bone and The Jackals.  Photographs on the night by Kate Johnston.

In the week leading up to the gig I was having good feelings about it, loving The Voodoo Rooms and having faith that the lads from The Holy Ghosts would put on a cracking line up, was I wrong? Let's find out. 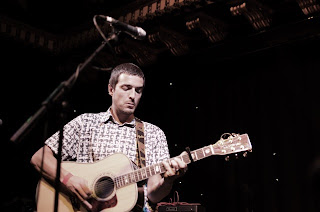 First up we get one man and his guitar Daniel McGeever dressed in a Beatles - hard days night album cover shirt, looking like a cross between Liam Gallagher and John Bramwell from I Am Kloot. His vocal tones are not dissimilar to one Paul McCartney (obviously a hero). Cool and confident, playing acoustic songs to light the way, a man you can relate to and lift you up. 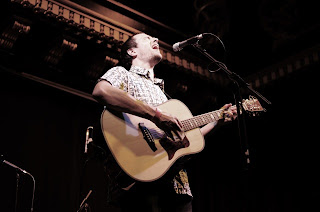 Laughing he dedicates 'Velicity Von' to Jon from The Holy Ghosts saying - “She's your favorite movie star as well” (I googled her, you'll be laughing too) and the lyrical subject matter makes a change from 'Silly Love Songs'. He tells us it's been hard work in the Edinburgh Fringe, and sings us new song 'These Days' a tune he tells us is written about getting older, he has the full attention of the audience.


He drops in a stripped back cover of the Beach Boys - 'I Can Hear The Music', a bluesy upbeat number 'Deeper In Your Soul' - a new tune which he has to read from a lyric sheet (as it's that new) finishing with a Smokey Robinson 'Really Got A Hold On Me' sounding 'Your Coming Home'.

Speaking to the top bloke after for a quick chat I comment on his high vocal style and he tells me he loves Macca and it annoys him such a legend get's a hard time. He has seen him many times and believes any amount of money is worth it to see your idols. Well, Daniel won't be charging ridiculous money to see him any time soon but I would love to catch him live again.

New to the Edinburgh scene and perfect billing for tonight’s show we get Black Cat Bone and it's a 3-piece with a backing percussionist on Cajon box. The two guitarists take turns with the bottleneck slide, the lead man Ross Craig and his 30 fags a day vocals playing harmonica and looking every inch the part. Opening tunes 'Going Down South' and 'Stop Breaking Down' are slow - dirty - sleazy blues, so much so I need a hose down afterwards (filthy stuff) I like it.

He tells us about 'Somersault Cat' how he wrote it with an ageing cat in mind. It's all Canned Heat style and then says to the crowd - “let's keep you dancing” - with a cover of the Stones 'Jumping Jack Flash'. He invites a guest harmonica player all dressed in black into the jam and says - “make a howlin sound for wolf, let's get wild before the next band, are you guys ready to boogie?” I think the howling crowd are up for it.

At this point I take a quick break backstage to interview The Holy Ghosts and unfortunately miss their 'I'm A Man Medley' but the folk with me tell me it was awesome. Another local band with their roots firmly in deep south blues, and their flipping good at it too. 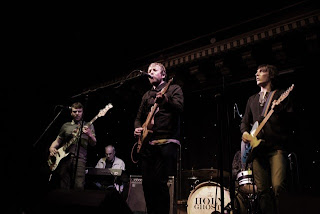 By the time The Jackals take the stage the crowd are well and truly warmed up, we all move closer. Lead man Scott Watson looking like a distant Scottish cousin of Guy Garvey and his 4-piece band lead us in to a different musical territory with opener  'Dust' a looser space- rock (verve like ) opus. Watson seduces us with a epic solo moving to galloping pace to finish.

Next we get 'Dancing round the nails' a 60's psych rock reminding me of The Bees, then changing direction for a tight The Coral 'Pass It On' sounding tune on 'Just To Pass The Pleasant Time'.

We move through lot's of influences and styles from the Surf Rock 'Ghost Soul Traffic' to '60's mod before a bluegrass stomp 'Waiting On The Man With The Sun' to a full cosmic rock instrumental to end the set. A very interesting live band experience. 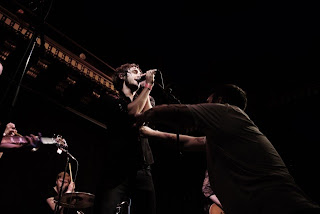 It's now up to The Holy Ghosts to prove they can Rock 'n Roll and the 'good ole boys' are back in town and this time they're headlining. Lead man out of William Douglas and The Wheel and inspiration for their name does his best Freddie Mercury impression, warming up the crowd and enticing us closer saying "Do your most for The Holy Ghosts" -  and main man Jack Sandison launches in to the new EP (Voodoo Shakedown) opener 'When We Were Kings'.

No time is wasted before we get 'Devil On Your Side' as Jack struts and pouts, he's our rock n roller shaker maker. The hilariously titled 'Don't Come A Knockin On Our Rock n Roll Coffin' with it's Johnny B Goode riff and infectious chorus follows. He reels us in like he's caught a runaway horse, with the slower country rock feel of 'Staring Down The Barrel'. He produces a set list which is from the last band shaking his head before saying - "you having a good time, we certainly are".

We're introduced to a new song 'No Stone Unturned' which isn't dissimilar in style to 'When We Were Kings' as lead guitarist Jon Mackenzie does a classic Pete Townsend windmill. Back to EP for 'Let It Die' and Jack dedicates it to Johnny Cash and sounds very much like the sadly missed Man in Black.

He tells us - "The next three songs will be like a rock n roll jam inviting friends to join us on stage" - we get a two piece brass section adding warmth and extra dynamics to the set. There's a lot of Jon's previous band The Complete Stone Roses coming through on 'Hounds' with a 'Love Spreads' vibe on the solo, then Led Zeppelin licks on second of new tunes 'Ride On Baby' .

The set moves into 'Kickstarter' where Jack gives it all, swigging from a vodka bottle while doing mad Mick Jagger moves then giving a two finger salute to us before leaving the stage, Rock n Roll!

Jon shocks us all by taking control of lead man vocal duties for the next track. Jack rejoins and everyone joins in for a rendition of The Band track, 'Weight'. A classic Americana pop tune to round off a top notch night of quality bands. For the next Dirty Blues night can we get the same line up please?


Malc: Tell me how has the Second E.P, Voodoo shakedown, gone done?

Jon: Sold really well, we underestimated how well it would do, judging it on the last EP's sales. We only have 10 left to shift which should go tonight after the success of our promotion tour. We're really happy how well it's done.

Jack: We have had good feedback from all over the world

Malc: The tour you did in England, did you headline or support some bands?

Jack: No, we supported local bands on bills like blues nights.


Malc: Any bands approached you to be their support?

Jack: Alabama 3 and The Rifles, we also have a few we can't mention just now (intriguing). He continues - “ We're trying to get our boot heels in the UK and take it from there, we'll be releasing other videos then getting the album out”


Malc: Best gig or experience good or bad on the tour?

Jonny: London. We had a great night in Manchester. Then on route down we got stuck in between Manchester and Birmingham (lost dog on the motorway) for 4 hours, it was a red hot day, we we're sick, got to the Hoxton Square venue, people were sat on the roof in the sun. We thought no one is going to watch us, then we struck a note and the place started to fill, Andy (keys) was great (laughing) It ended a packed venue and a great night.


Malc: Will this (Dirty Blues) be a regular fixture?

Jack: We're going to put on a blues event here at The Voodoo Rooms every couple of months; Rhythm and blues, country rock acts, none of that indie band pish.

Malc: So another tour on the cards?

Jon: We're hoping to release the album late 2013/early '14 then we'll go on a tour taking in Europe.

I ask a few questions relevant to their influences.


Malc: What's the connection between U2 and Gram Parsons? Jon and Andy: Not sure.

Jon: hesitates before going for Gibson.

Jack: I'll be controversial, 'Heartbreak' because it has more flavor and shake to it.

Band: 'I Walk The Line' though we all agree the 'Hurt' video is cool.


Malc: If you stood at the Crossroads what would you sell your soul to the devil for?

Malc: If you could have released a tune under Sun or Mercury?

Jon: Can you still record there?

Andy: Yes I’ve been there, all the original equipment

Jack: If the new album does well you never know the next one could be recorded at Sun studios.

Finally I ask about their hero Chuck Berry.

Malc: 'Johnny B Goode' or 'No Particular Place To Go'?

Jon: My favorite tune of all time since seeing Marty McFly play it in Back To The Future, I loved that version.

Jon: Can I add? It gets my back up when you play a set of covers and the only one that gets people up and dancing, not just jigging but holding hands and dancing is 'Johnny B Goode'. 60 years ago it came out, timeless

Andy: Jon introduced me to him, Berry is not only a great guitarist but a storyteller

Jack: Just don't open a restaurant with him

Jon: Can you release a separate blog just about Chuck Berry?


Charles Edward Anderson "Chuck" Berry (born October 18, 1926) is one of the pioneers of rock and roll music. With songs such as "Roll Over Beethoven" (1956), "Rock and Roll Music" (1957) and "Johnny B. Goode" (1958), he refined and developed rhythm and blues into what made rock and roll distinctive, with lyrics focusing on teen life and utilizing guitar solos and showmanship that would be a major influence on subsequent rock music.