Now normally Ralph brings you news of all that's good in unsigned music, however his man in Scotland Malcolm 'Anorak' Parry was heading for a Rival Sons concert so a live review had to be on the cards.

Rival Sons are a proper rock 'n' roll band from Long Beach CA comprised of Robin Everhart, Scott Holiday, Mike Miley and Jay Buchanan and they formed in 2008.  They signed with Atlantic but quickly left and self-released their first album 'Battle Before The Fire' in 2009.

In 2010 Rival Sons made a name for themselves by supporting acts such as AC/DC, Alice Cooper and Kid Rock and by performing a televised show at The Indianapolis 500. The British metal label Earache Records showed interest in the band. Liking the idea of “bending the rules” by signing to a traditionally death metal label, they signed with them in Autumn 2010.

In February 2011 they released their self-titled EP, quickly followed by the full-length album 'Pressure & Time' in June 2011. The cover of 'Pressure & Time' was designed by renowned cover artist Storm Thorgerson (the man behind the 'Dark Side Of The Moon' cover, who sadly passed away recently). The album was written, recorded and mixed in twenty days in Los Angeles following a tour.  According to the band, 'Before The Fire' was written and produced in the same way. 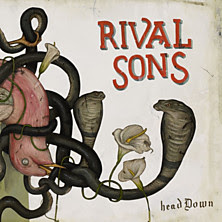 In February 2012 they went into Honey Pye studios in Nashville, again for only 20 days, to record their next album with Dave Cobb and Vance Powell, then on to a European  tour. The album 'Head Down' was released in September, garnering critical reviews.  A sold-out tour followed in September and October.  They finished the year by winning the ‘Breakthrough Act of the Year’ at the Classic Rock Awards and the ‘Best New Band’ in Planet Rock’s user poll.
They began 2013 with a short tour of the USA and Canada, before moving on to Europe for another tour across the UK and Malcolm caught their Edinburgh gig.


Malcolm Parry takes up the story from The Picture House in Edinburgh.....

In rock's history we have had some great lead singer stars like Plant, Coverdale, Gillan, Tyler and Rodgers and as the band take to the stage lead man Jay Buchanan oozes the spirit of all.  Tonight we are in good company (not bad company) as full of charisma, cool as a 6 pack of bud on ice he moves like Jagger (as the song goes).

The band kick in with 'You Want To' from their excellent new album 'Head Down' and as Buchanan sings instantly the range and power of his voice impresses.  I can see why we were given plastic pint's, if glass his octaves would have shattered all in our hands.

During the opening track I feel like I’m at a early Deep Purple or Free gig, all 70's style riff's and melodies, lot's of rock clichés, like the drummer flipping a drumstick up in to the air and catching it but all the better for it. Tonight we are witnessing a good old fashioned rock n roll band, not alternative rock like Biffy Clyro or Muse, a comment Buchanan makes later.

Second tune 'Wild Animal' and the vocal style reminds me of the Steve Miller Band and the riff like Wolfmother's 'New Moon Rising'.  Ironically the drummer looks like The Muppet’s Animal in a headband and braces.  We get Jay leaning into the mic all Robert Plant shouting, 'What the fucks going on out there?'  We're witnessing one of the best rock bands since the 70's that's what (OK my opinion).

Lead guitarist Scott Holiday looking like a cleaned up Izzy Stradlin from G 'n' R with a musketeer mustache providing screaming riffs and Bassist Robin Everhart ad-libbing along to the lyrics and keeping things tight.  The set so far runs along almost seamlessly with little chat from front man (I stress so far).

We get - “Do you guys want to hear something from our first record?” - We all nod and shout approval. 'Memphis Sun'  sounds so good and very Free/Bad Company.  Next straight into a new one off the new album we get 'Until The Sun Comes' which is very poppy and uplifting, again with Steve Miller Band vocals making it a live winner. Time for a slow one and Buchanan tells us the heritage of the lyrics, he talks about death being a beautiful thing and about losing love ones.  He introduces new album track 'Jordan' with its acoustic intro and vocals like a young Joe Cocker, strangely the song and feel reminds me of 'A Little Help From My Friends'.  The back end of the song he shows us the power of his range by standing two feet back from the mic, voice still clear as slide guitar rings out. 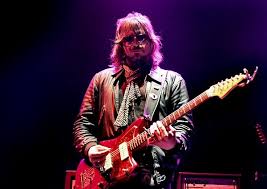 He then goes all political Bono on our ass telling us about the next song being inspired by the Soldier Blue/Native Indians battle for land in America's history, yawn, your losing us man, we came here to rock, sing us a song? (we're all thinking). They break into the epic 'Manifest Destiny P1' all classic Led Zeppelin and it brings us back, Jay leaves us to Holiday and the band who gives us a guitar solo and licks Jimmy Page would have been proud of. 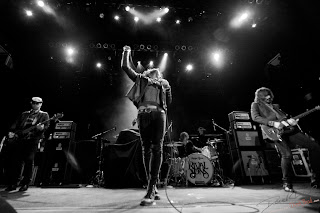 Jay returns and they go into 'Keep on swinging' all Black Keys bluesy/rock and Plant/Rogers screaming.  Another chat to us telling how he's been up to Edinburgh castle trying out our whisky since he's half Scottish.  For the closing track from 'Head Down' we're left with Buchanan and axe man Holiday with Jeff Buckley style beauty 'Sacred Heart'. This guy is so versatile with a touch of early Queen in there.  They leave us to a drum solo to go backstage swigging from a Jack Daniels bottle (at least that's how i imagine it) 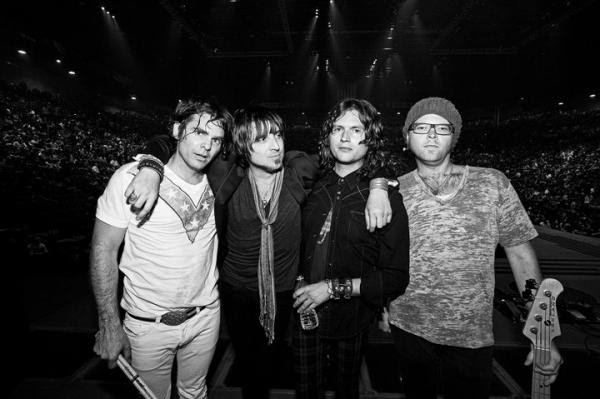 The predictable encore follows with first album's 'Burn Down Los Angeles' another lengthy speech about false relationships (ho hum) and  the set closer 'Soul' sounding all Joplin-esque and very much like Otis Redding's - 'Try A Little Bit Of Tenderness'. Nice slow soulful/blues finish to a quality set.  These guys are destined for bigger venue's and hopefully festival headline slots.  It would be nice to see a band at the top who have their heart and soul firmly rooted in classic Rock n Roll.

Many thanks to whoever I may have pinched the lovely pictures from for this blog, should you require them to be removed for any reason please contact me and I shall do so....if you want to sue me...I'm a Jack Russell with no money...
Posted by Fruitbatwalton at 2:15 pm