Ralph took a look at Sofar Sounds a movement which brings music lovers together in secret living room locations to hear some of the world's most cutting edge artists in order to create an intimate and spellbinding atmosphere at pop-up gigs in over 18 cities worldwide.

Songs From a Room began in March 2009 in the living room of singer songwriter and co-founder Passion Ate Dave.  It is an innovative concept, dedicated to bringing the best of new music to an unplugged, intimate, unusual space or venue. Mix in a crowd of dedicated music lovers, other artists, and industry professionals, and you have an evening which promises electric performances and new networks.

Songs From A Room offers artists and music fans the unique opportunity to perform and experience intimate gigs in packed living rooms regularly. The movement is now going global with shows happening in New York, Paris and many other cities worldwide.
They're just about to hold their first ever Sofar Sounds gig in Leeds and you will have to subscribe to their newsletter if you'd like to take part in this exclusive event.  Gigs are free (although you're encouraged to make a donation) and you will experience some cutting edge acts  in an intimate venue.

Due to circumstances beyond his control Ralph was unable to attend the latest Manchester gig, which originated due to organiser Tamsin Holleran living in New York, hearing about it and becoming a regular attendee.

On her return to Manchester she traveled down to events in London until having the idea - "I'm going to start this up in Manchester myself!" - that's exactly what she did and that's also the reason Ralph sent fellow blogger Make It A Little Bit Louder to the communal room of a travellers hostel to wait for the first of five still unannounced artists to begin in to make sure you don't miss out on a report of the night. I'll let him take up the story..... 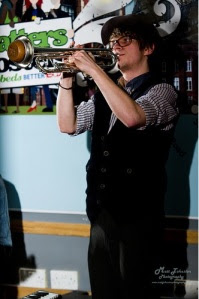 People sat cross-legged on the floor, perched on tables or those lucky enough to bag a spot on the couch where called to order, and we had a brief introduction to the night along with the golden rule – respect the artist, remain quiet during the performance and stay until the end. First up were Huddersfield alternative band Maia to treat us to some twisted folk music that at times could have been an extract from the Godfather soundtrack played by a Mariachi band. This multi-talented band switched between instruments including ukulele, banjo, mandolin and  trumpet supported by some great vocal harmonies, and when we were invited to clap along and join in for the chorus of one particular song a room full of people singing along with the band was a beautiful thing to behold and helped to re-enforce the community feel of the night.

Next up were Leeds based outfit The Wax Collection to provide a 60′s infused soulful acoustic sound with the stand out feature being the wonderfully melodic vocal harmonies they created.

With the audience sat around the band and the lights dimmed it felt like sitting around the camp-fire listening to your friends playing a tune for you.

The simple recipe of acoustic guitar, bass and tambourine combined with those brilliant vocals was the perfect blend to create a warm and sunny ‘summer of love’ feeling on a cold Manchester night. The slightly bemused travellers who had wandered in seemed to be enjoying themselves as well!

The third act of the night were the fantastically named Six Toes who are a great example of what Sofar Sounds is all about, bringing the audience and artist, who may not usually meet, together in the same room.

What this London band created was something I hadn’t seen live before, the best way I can describe it was a soundtrack to a really cool avant-garde film. Using stand-up bass, cello and violin to create beautiful soundscapes intertwined with melodic guitar and yet more great vocals (seems to be a theme of the night). There's something special about hearing strings live that makes the hairs on the back of your neck stand up, the whole room was captivated.

After a short break we were next treated to folk singer Rachel Hillary who had the hushed crowd mesmerised from start to finish with just a plucked guitar and amazing voice but perhaps the most mesmerising moment was a rendition minus the guitar to leave a haunting a capella song.

This was poetry set to music which you had been privileged to be allowed into for a brief time. Again this was not something I would usually go out to see but found myself total captivated by the performance. 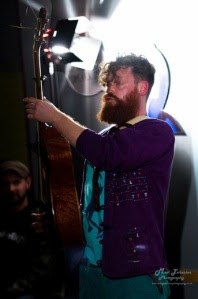 And so to the final act of the night Age Of Glass an eclectic looking trio whose music matched their look. A mixture of blues, dub, reggae, funk, hip-hop, electronic bleeps and some amazing falsetto vocals; experimental and innovative with a unique sound that was underpinned by a great bass sound keeping everything deep. A house-party vibe had now descended on the room with the crowd now caught up in the seriously funky sound and captivated by the singer/guitarist’s vocals ranging from falsetto to rap plus some crazy dance moves thrown in along the way! A great way to end the night.

There was so much to enjoy about the night; the sense of community, the quirky location, the brilliantly eclectic line-up, but most of all being part of the event and not just going to a gig and demanding to be entertained.
The next Manchester event is planned for the 20th April, if you’d like to go along sign up to the Sofar Sounds Mailing List and drop an email tosofarmanchester@gmail.com to apply for a guest list place.
Check out the Sofar Sounds Website and YouTube channel as well as the Sofar Sounds Manchester Facebook page
If you are an artist who would like to be involved in future events again drop an email to sofarmanchester@gmail.com with links to your music to be considered.
**All pictures courtesy of Matt Johnson Photography

Posted by Fruitbatwalton at 4:45 pm