Thanks to Ralph's ever expanding empire of reviewers (OK there's two now) in Scotland I bring you a live review of the Book Group 'Homeward Sound' EP launch in Edinburgh's Pilrig St Pauls Church.

They were ably accompanied on the night by Rory Sutherland and Martin Donnelly, Campfires in Winter, Plastic Animals and Live From The Latin Quarter DJ's and the review is courtesy of the extremely obliging Mr Tom Wheeler.

Midst the constant cross-pollination of the Edinburgh music scene, there comes a time in any band's development where the shared points of reference perceptibly change.

Around a year ago, with minimal fanfare, a band called the Bad Books played a couple of support slots around the capital. Wise musical sages pointed around the stage, explaining the group's origins to the rest of us: “that's him from the Kays Lavelle; yeah, he used to be in Come On Gang!”, and so on.

Over a few months and a handful more gigs, the band – by now known as Book Group to avoid any Phantom Band-style confusion with another act of the same name – gradually carved out its own identity, culminating in a triumphant opening set at Fence Records' Gnomegame Festival this April in Anstruther.

Finally, on Saturday, Book Group launched their debut EP, Homeward Sound, in Edinburgh's Pilrig St Paul's Church. And over the course of a 50-minute set, that shift of reference points took place. Now, nobody is asking, “What's such-and-such's new band called again?”; instead, they're asking, with considerable excitement: “Have you heard Book Group yet?”

The cross-pollination theme began early in the evening, with Martin Donnelly (The Savings and Loan) teaming up with Rory Sutherland (Broken Records) in an enchanting combination of electric guitar, violin and Americana-infused melodies. 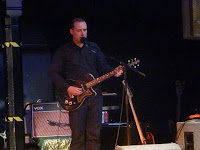 In tribute to the hardy souls who'd braved the Edinburgh monsoon to come early to the gig rather than sit at home in front of Eurovision, they opened with a stripped-down version of 'What's Another Year', Ireland's winning song from 1980.

(Martin's reference to singer Johnny Logan as “Johnny Lynch” may have been a slip of the tongue, but it seemed rather appropriate, given the prevailing tastes of the clientele.) 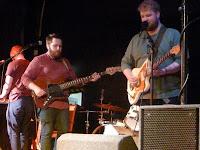 The amps were cranked up for the arrival of the gloriously-bearded Campfires in Winter, who (remarkably) were playing their first ever Edinburgh show. So, for many of us, this was the first we'd seen of the Croy four-piece – to be honest, it was the first time I'd realised that Croy comprised anything more than a railway station car park – but a wonderfully raucous yet tuneful half hour shook us out of our ignorance. 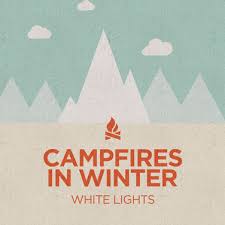 Comparisons to Frightened Rabbit are understandable but they don't tell half the story; the band's sound varied greatly from one song to the next, and occasionally within the same song. To these East Coast ears, single 'White Lights' had a hint of Cancel the Astronauts about it, and closer 'Mortigi Tempo' shared the piano-led, slow-building qualities of some of Meursault's more recent offerings – which can't possibly be a bad thing. 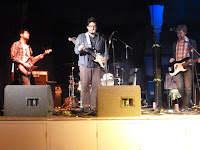 Plastic Animals must be getting sick of all their reviews describing them as an “Edinburgh based atmospheric punk rock sludge ensemble” – notwithstanding that the line comes directly from their own website, and that they admit themselves that it “sounds like wank”. So by way of variation, I'll borrow a different description:

(Admittedly, that's not a reference to the band, but to the Barney's Beer that bore their name for Song, By Toad's Beer vs. Records project. But hey, it's not as if I do this for a living, so cut me some slack here.) 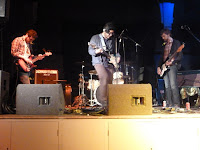 Two songs they recorded for that project bookended a compelling set. The former, “Pizarnik”, was far more understated and melodic than their self-penned assessment would suggest; but the band reasserted its sludgey credentials in fine style with a gloriously noisy wig-out at the end of closer “Floating”. The haunting “Sundowning”, from last year's Automaton EP, was another highlight. 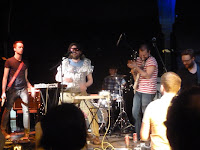 After three brilliant bands – punctuated by fine DJ sets, and inexplicably-costumed band intros, from the Live from the Latin Quarter crew – Book Group could have packed up and gone home, and nobody could have complained that they hadn't had their six quid's worth and more. (SIX QUID!!! For all this. It's almost obscene. With that sort of value to be had in your nearest music venue, you really can stick your Orange Wednesdays somewhere improbable.)

Fortunately for the increasingly expectant audience, Book Group were going nowhere ahead of their biggest headline gig to date. Most of the set may have been familiar to their growing troupe of regular attendees, but it was none the worse for that. 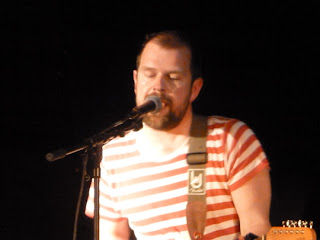 I could bang on at length about every song, but I'll focus on the four featured on Homeward Sound: the fabulous, feedback-strewn 'Summer of Lunches', as impressive an opener for the set as it is a closer for the EP; 'Year of the Cat', all energy and pulsing guitar breaks; the brooding menace of 'BOP', with its repeated reminder that “the vultures are waiting”; and the venomous lyrics and driving bassline of 'Seedlings'. 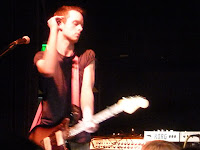 Plenty of bands have had commercially and critically successful careers without ever producing four songs as strong as these; so the fact that these are the very first Book Group tracks to be committed to record is more than encouraging.

Arguably the biggest surprise of the night was singer Graeme Anderson's failure to produce his trademark megaphone for traditional set closer, 'Victory Lap', a song whose final refrain of “don't you ever change” was etched on to my brain – in a good way – the first time I ever heard it.

Perhaps Graeme decided it was time to leave the whole megaphone thing behind, thinking it an unnecessary gimmick as the band moves inexorably towards international megastardom. Or perhaps he just forgot it. I can't say I cared either way: it's a bloody brilliant song, and an entirely apt conclusion to one of the gigs of the year so far.

Posted by Fruitbatwalton at 10:24 pm