Ralph's a supporter of all things Indie so when he saw that Rufus Guitars who are a British guitar maker based on the Wirral offering to endorse Indie bands he was intrigued.....

Their guitars are hand-made in a studio-workshop in Oxton and they try to use as many British parts and materials as possible.  This includes Tangent Pickups and selected wood grown and seasoned in the UK.  Every guitar they make is named and numbered and comes with a certificate of authenticity.

Sean- "I started a guitar company because I wanted to work doing something that I loved - which really means that it isn't work at all! Being quite selfish, I decided to make guitars that I wanted to own and play."

"My aim is to make your 'go to' guitar, the one you always pick up, the one that feels comfortable, the one that provides you with your greatest inspirations and the one that you get your best tunes from."

"I never had any ambition to make expensive guitars, just good quality ones from British woods. Hopefully, after years of use and abuse, your Rufus may be battered, bruised or covered in stickers, but you will still love it and still play it every day."

One of the artists endorsed by Rufus Guitars is Lem Mellor who plays a Rufus Radian with Tangent Double-Core pickups.  Lem is an experienced musician and engineer who created Angel Valve Studios based in Birkenhead who also offers songwriting tuition and instrument tuition across a wide range of instruments, from all manner of guitars and bass to ukelele and banjo. He is also proficient on keyboards and has sessioned on various tracks for those recording.

Sean - "Many commentators state that wood variety has a significant effect on the sound, so we decided to see what differences we could find with samples of woods that we have used; these were Cherry (UK grown), Lime (UK grown - this is also know as Basswood and Tilla), Pear (UK grown), Sapele Mahogany, Soft White Pine and Sweet Chestnut (UK grown).

"We wanted to get a feel for the resonant nature of each wood type - did it 'ring' or was it 'dead'?"

"We quite naturally expect that different wood types give rise to different sonic characteristics and this is something that we lean from childhood in our every day experience. However, exactly how a wood variety affects a guitar's sounds and feel is not so obvious; we would have expected that the density and porosity of the wood would have an effect, and whilst it does, it didn't to affect the "ring" of the wood."

"Cherry had the greatest density and equal with Pear for it's ability to ring.

"Lime (Basswood) low density but a good ring, use in budget and mid-range guitars

Sapele Mahogany oddly disappointing resonance since this is used in some very expensive guitars, and almost indistinguishable from Lime (or even Pine!). for resonant but slightly denser."

"Softwood Pine is not really a traditional wood for electric guitar production as it's low in density but otherwise comparable to other woods for resonance, with a nice ring.

Sweet Chestnut has the lowest density in the test but had a nice ring to it - would make a very lightweight, if rather soft, guitar body with a characteristic ring." 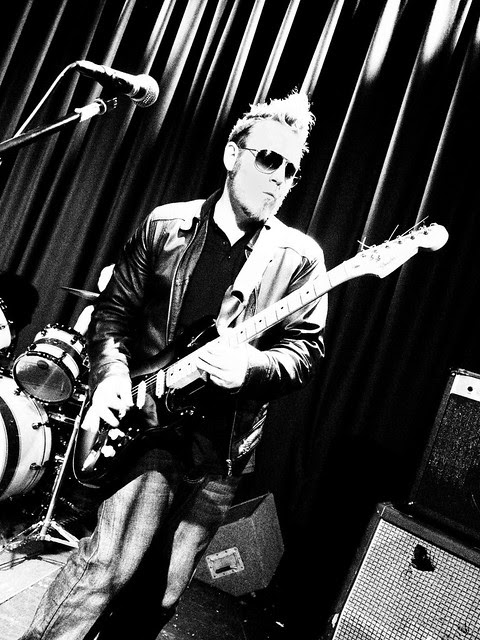 Another artist endorsed by Rufus Guitars is Lee Wylding of The Fireflys, who have been No 1 in Ralph's Top Ten Blogged Band Chart for the last five weeks after the release of their third album 'Embers Of The Autumn'.  When asked about his Rufus Infinity, custom made from Scottish Elm Lee had this to say -

"I'd been looking for good quality, British made guitars for years and to be honest, although there's a few around, I didn't find one that was truly 'me' and catered for my varied guitar style - until now - the Rufus Infinity custom is what I've been waiting for all my life.  It really is a work of art."


So there you have it, a UK Indie guitar company looking to endorse UK Indie musicians; whilst I have no technical knowledge of guitars whatsoever, they look extremely sexy so if you're on the lookout for a new guitar, want to be associated with a company that cares and like the look of what you see get in touch with Sean at Rufus Guitars now!
Posted by Fruitbatwalton at 11:57 am