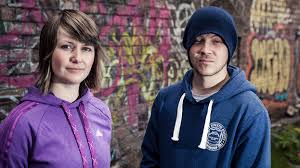 simple words for the complex musical experience that is Hector Bizerk.  Formed just over two years ago and originally comprising of  seasoned rapper Louie and equally experienced drummer Audrey Tait.

They've made massive inroads into the Scottish music scene with their unique blend of Audrey's creative and complimentary drumming style  amplifying Louie's complex socio-political flows.  Hang on I'm starting to sound like one of those overly verbose, up their own arse music bloggers that Ralph hates so much!


So Ralph took the chance of putting a few questions to Louie.....

Louie:  "We're currently working on a new album.  'Drums. Rap. Yes.' was pretty ambitious considering we had only been a band for 15 months at that time.  The debut album received good reviews and lots of mainstream radio attention but any artist worth paying attention to will always strive to improve."

"I've picked flaws in my own contribution to the record, that's how honest artists develop and stay focused.  I'm proud of that record but our next one is going to show further progression and be even more left field."

Louie:  "I always find it tough to define what influences me.  Most of the time I write about my surroundings or feed off things I have read.  I've recently finished a solo album called 'Lost On Hope Street'. It's a social conscious piece about the wider view of working class Britain."

"I enjoy a bit of everything really.  I absolutely love The Black Keys.  I also like Alt-J and Bastille too. I like a lot of High Focus Records roster at the moment but I also enjoy some of the US underground stuff like Epidemic, Nems, R.A Rugged Man that type of stuff.  Mistah Bohze and NC Epik are always smashing everything too!  Blastoid McGonigle is one of the finest hip-hop albums on the planet."


Ralph:  With the current success of Stanley Odd are you finding it easier to be accepted in the current Scottish music scene (Frightened Rabbit, Admiral Fallow and the like) or do you consider you'd already made the transition?

Louie:  "We're good friends with Stanley Odd but I think we are coming from opposite ends of the spectrum in our music.  Audrey and I try to write hip-hop that can encapsulate an audience even when stripped bare to just drums and vocals." 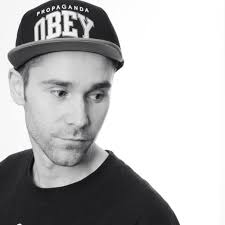 "It's dangerous territory and we enjoy to take the rhythms to unexpected places.  I think we have managed to make great strides because of our unique take on songwriting and their is no other show similar to ours.  Musicians can appreciate the berth and depths of Audrey's drumming and my syllable matching.  We can be quite muso. Incidently, Solareye and myself are collaborating with super producer Scatabrainz at the moment and will be releasing a record together in March.

Ralph :  Any aspirations to take Scottish rap to the masses/will it translate 'oot the Auld Country'?

Louie:  "I suppose there will always be a stigma when people label what we do as Scottish rap or Scottish hip-hop.  It's just hip-hop.  People abroad are receptive to our music.  I think they enjoy the different accents and colloquialisms.  Good music speaks for itself and transcends any boundaries that we may encounter."

"Of course not everyone is going to enjoy our music as it's a bit peculiar to some people but not everyone enjoys Snow Patrol or Kasabian and they sell out arena tours.  I think I am a better singer than Liam Gallacher and he does alright! haha!"

"It's great to have that input and helps us become even more experimental. Audrey has recently bought this new Akai synth too and uses a I-pad to create the type of sounds that would give children nightmares. Oh, and the drum kit has grown a few more limbs since the last record too, there is now a djembe in the mix too."

Ralph:  How was it sharing a stage with one of the godfathers of Hip Hop, Jo Saddler again recently, learn anything?


Louis:  "It was tremendous.  I had met Flash before when Bigg Taj and I supported him in 2007.  He was very complimentary about our music and particularly how we have a Scottish sound. He reckons we have a unique selling point and a good solid foundation for building upon. We also played with GZA, MF Doom and EPMD."


Ralph:   How hard has it been to establish yourself being self-funded...hints and tips for others doing the same?

"I think writing good music speaks for itself.  We have had no financial backing or label pushing our music.  It's down to the support of genuine music lovers who understand the creative integrity behind Hector Bizerk.  Word of mouth is our secret weapon. Oh, and hard work too."


Ralph:  How do you seem to stay so grounded with all the recent critical acclaim for both album and gigs?

Louie:  "I look at my bank balance!  haha! I have never thought about it like that.
When artists disappear up their own arse they stop making the good honest strides that made them likable in the first place. I've saw it happen with bands time and time again and it's important not to get caught up in your own hype. We have made some steps in the right direction but we've made mistakes too.  I think learning from mistakes is just as important as accepting praise from critics and music lovers."


Ralph:  Can you continue to be consistently 'different'?

Louie:  "I believe we can.  Every song is a blank canvas. It's up to us to keep creating new colours and textures."


Ralph:  The importance of socio-political lyrics in rap? Do you think most of the fans take them in...

Louie:  "I think that conscious lyricism is at the heart of hip-hop.  It's all story telling, integrity and perspective.  If people want to hear senseless shite about clubbing and boy meets girl romance they will listen to chart music.  I think our target market have open ears and open minds."

Posted by Fruitbatwalton at 7:27 pm