Ralph's views on Twitter and his Shorty Award nomination 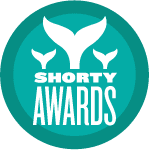 Hollywood has the Oscars. Broadway has the Tonys. Now Twitter has the... Shorty Awards 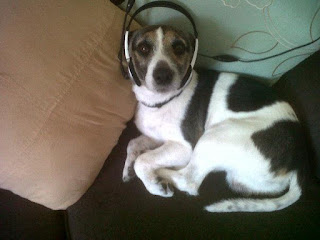 Now what's the best way to promote Ralph for a Shorty Blogger Nomination...better write a blog about it!


Ralph has been put forward for a prestigious Shorty Blogger Award for his presence on Twitter, and he's even been interviewed for it.  If he wins he can even go to New York to collect the award but  that involves injections and six months in kennels so maybe not!


You can vote for Ralph by following the link here.....

Ralph will be eternally grateful for your vote and also appreciate you spreading the word to your friends and asking them nicely if they'd vote too!

The Shorty Interview with Fruitbatwalton

What are six things you could never do without?

Twitter, Laptop, Wine, Coffee, My Partner, My Dog, Our Kids and not necessarily in that order....

How do you use Twitter in your professional life?

I practically live on Twitter where I can interact with both the subject matter of my blogs (bands) and my readers (their fans).

What was the funniest trend you've seen?

Who do you wish had a Twitter feed but doesn't?

What are some words or phrases you refuse to shorten for brevity?

Is there someone you want to follow you who doesn't already? If so, who?

@TheRollingStones account who have replied directly to me once which I believe is very unusual and if they followed me I'd blog them.

Have you ever unfollowed someone? Who and why?

I only ever unfollow people who have unfollowed me or who are offensive...Twitter is a friendly place, let's keep it that way.

Why should we vote for you?

I'm a Jack Russell who writes about music and food...what's not to like?

What's the most interesting connection you've made through Twitter?

@thefunlovincrims whose music I love dearly followed me before I followed them...the highlight of my Twittering career. #scoobysnacks

Hashtag you created that you wish everyone used?

How do you make your tweets unique?

I keep my Tweets as funny and informative as I can. I'm a Jack Russell Terrier that blogs music which is about as unique as it gets.

Ever get called out for tweeting too much?

Surprisingly...not yet. But that's because I try to interact and not just promote.

140 characters of advice for a new user?

Don't be offensive, try to be funny, always interact, be informative, be friendly, enjoy yourself, learn as much as you can.

What question are we not asking here that we should?

Who do you admire most for his or her use of Twitter?

What is one of the biggest misconceptions of Twitter?

it has no worth

Ah now there's the question you asked on what question you hadn't asked me...I'm funny, informative and interactive.

other than publishing my blogs I tweet dependant on what other people are tweeting, I often dive into other peoples conversations.

How do you use social media to motivate yourself or others to live a healthier life?

I have a Food Blog which I use to try to inform and educate people on good things to eat and easy ways to cook them.

How has social media helped bring your family closer together and #keepgoodgoing?

It helps #keepgoodgoing by allowing me to keep in touch with family far and near at the same time.

I write a music blog for unsigned Indie bands and artists and it's a great way to inform people of what's available.

yes. It's allowed my words and unsigned artists music to be read and heard by more people than I could ever have hoped for without it.

What do you wish people would do more of on Twitter?

Not try to sell me stuff...especially books!

How will the world change in the next year?

more people will Tweet and therefore read my music blog and a previously unknown band will become world famous.

What will the world be like 10 years from now?

The world will become a place devoid of record shops as everyone will buy their music online but I strive to bring Indie music to the masses.
Take the Shorty Interview at Shorty Awards, the awards honoring the best of social media. 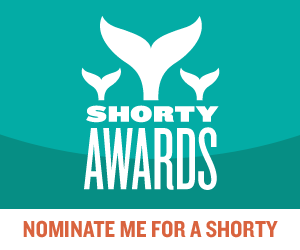 Nominate Fruitbatwalton for a social media award in the Shorty Awards

Posted by Fruitbatwalton at 12:04 pm