Looking for a venue in or around Bradford that offers a mix of music, top artists from around the world in a friendly, intimate atmosphere?  Look no further than The Live Room at The Caroline Social Club in Saltaire.

The Live Room is the brainchild of Ron Dukelow and Hilary Booth, both experienced music promoters, who, for ten years were the driving force behind the highly successful Live at the Talbot series at the Talbot Hotel in  West Wales.  It's their intention to bring the same ethos to their new venue at the Caroline Social Club to make it the best folk and roots music venue in the Bradford area.

If you have a suggestion for an artist to play there get in touch. They can't promise that they'll be able to present them, but they'll consider all ideas.

After a previous gig featuring My Darling Clementine  this comment appeared on Twitter.....'The Live Room is the best thing that has happened music wise in this area in the 15 years I've lived here' (Adrian Gallagher).

Next gig on the agenda.....Mawkin 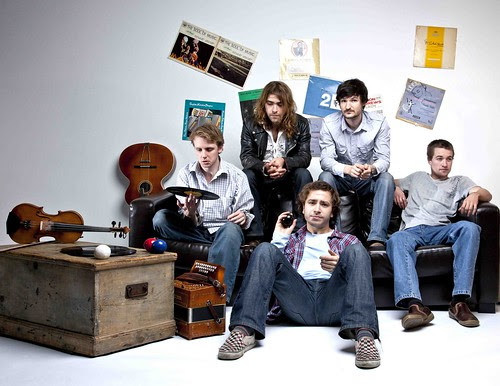 Since their formation in 2002 Mawkin have grown into one of 'brit-folk's' brightest new guns - a blistering 5-piece band fusing folk, world, jazz, prog and rock, they are no strangers to the cutting edge of the music scene while still retaining all the verve and mystique of ancient folk music traditions from across the globe.

Forged out of the electric partnership of brothers Jamie and David Delarre, Mawkin are a concoction of brilliantly inventive musicianship and uninhibited carnal exuberance. Initially coming together as a 3-piece, the band has gradually evolved into a five-piece, with Nick Cooke on melodeon, Danny Crump on bass and Lee Richardson on drums.

Tours and festivals followed the success of their debut album ‘The Fair Essex’ and the next two years proved to be a turning point for the band. Much of it was spent honing their skills and building on their energetic live shows in the UK and Europe. Mawkin also worked hard to gain the attention of new fans supporting a diverse selection of artists on tours; Eliza Carthy, Billy Bragg, Show of Hands and Mr Scruff.

Their new album, ‘Crow’ signifies a real organic process – the band recorded, produced and designed everything themselves - that harks back to their critically acclaimed debut ‘The Fair Essex’ and looks set to be just as well received. They were also featured performing live on the recent BBC documentary, 'London Calling', presented by Jools Holland.

Two years in the making ‘Crow’ is another landmark in the band’s history, ancient instrumental folk tunes from around the globe are dragged delightfully into the modern age. Folk tunes are fused sublimely with jazz, rock and prog with a swagger and conviction that is thrillingly reassuring.

There's the jaw-dropping vocals of Eliza Carthy on the haunting and soulful ‘Bad Girls Lament’, one of England’s finest songwriters Steve Knightley delivers a pounding acoustic pop remake of his own ‘Its All Quiet’, Jim Causley is presented in full show on ‘The Bellringers’ and Mawkin’s own guitarist and singer David Delarre gives a raucous  cover of The Kinks ‘Harry Rag’.


There is a real sense that ‘Crow’ is landmark achievement in the bands history- not just the music but also in the approach to the record. Melodeon player Nick Cooke recently said.....

The band were also insistent on creating their own cottage industry; Drummer Lee Richardson explains.....

Together with Nick Cooke (who also works as Mastering Engineer for Extreme Music the Production Music arm of Sony/ATV)) the band could spend much more time developing their sound in the studio than ever before, even the artwork was produced by Becca Eastland – Lee’s partner and professional artist. ‘Crow’ signifies a real organic process that harks back to their critically acclaimed debut ‘The Fair Essex’ and looks set to be just as well received.


Support on the night is.....Louise Jordan

Louise Jordan is a young singer, composer and multi-instrumentalist rapidly making an impact on the UK acoustic music scene. She has a purity of voice which melts the toughest of hearts and a delivery which unsettles the most discerning critic.

She has completed two UK tours with performances alongside Eliza Carthy, Phil Beer, Cara Dillon, Kris Drever and Richard Digance. Her music has been played on both local and national radio and she also appeared in UK Vogue

‘a stirring, lilting grace’ - The Telegraph

Posted by Fruitbatwalton at 10:50 am