My Forever.....Hard graft gets you places

Now Ralph's had his eye on My Forever since June of last year and since then things have escalated rapidly for this young band from Thirsk.  They've gone from almost a covers band to a fully fledged in your face rock/pop group with a stellar future in one fell swoop.

Early June saw My Forever release 'Til The End which was accompanied by an atmospheric video and a successful tour of Glasgow, Newcastle, Birmingham, London, Sheffield and Manchester which led to much critical acclaim in the local press.


'Til The End starts with a promising moody, orchestral vibe before mellowing out to a more predictable US stylee pop vocal.  It'll be a firm favourite with the female fans and go down a storm at gigs.

September saw My Forever sign a deal with Fierce Management and they've never looked back.  Another tour in October saw them re-visit the big cities again to much acclaim and saw them establish a major fan base.  Jenny Eells at BBC Introducing Radio York started featuring their EP 'The World Wont Wait' on her show.

Late November saw a lot of airplay on Internet radio in America.  Which brings us up to December with the news that 'My Forever' had been play-listed by Radio 1 for the week 17th - 23rd and they released a new video for the track.

My Forever capture all that's good in the pop/rock world just now, with their strong lyrics and sharp musicianship bridging the gap between 'boy bands' like The Wanted and the likes of the 'heavier' more listenable US pop/punk band All Time Low.

My Forever are - Dave Ingham, Daniel 'Twiggy' Twohig, Seb Santabarbara and Ben Watson and their only show currently is a headliner at Fibbers in York on Sunday 17th February at 7 pm and it'll be one not to be missed! 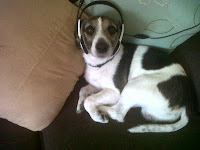 It's hardly surprising they came to Ralph's attention of course as Seb has a Rock Dog in the shape of Pirlo.....

Posted by Fruitbatwalton at 6:27 pm