As promised here's news of Six Storeys High hitting the road to promote 'The Childhood' EP which will be
available to buy from the 11th June.  As you can see from the photo they're excited about it and so should you be!

Next week, they head off on a
ten-date tour of the UK. They
will be returning to some favourite venues from last year, and bringing in brand new areas like Liverpool and Wales.


Sat 16 - Lomax, Liverpool - Six Storeys High hit Liverpool for the first time for a show at the legendary Lomax - The Verve, Radiohead and Oasis have all played here, and now so do they, on a free bill with Soul Captain, Stolen Haven, The Crooked Empire and The Vigilantes (not the original Vigilantes from Warrington 'cause they'll be in their seventies by now).


Tue 19 - Cafe 1001 (love their website), East London - They're are back in the capital for a free show in East London - they are at Cafe 1001 in Brick Lane with The Waylayers and Lorena B (don't be surprised if Jarvis Cocker's there to see her) and a DJ set from Zaflon. they are on first and sharp at 8.30pm, so get down as soon as you can.


Wed 20 - The legendary Dublin Castle, in Camden, NW London (where Amy Winehouse used to work, Madness started out and anyone from Coldplay to The Arctic Monkeys have played)- they are back at one of their favourite venues from last year. They are supporting Freedom Of The City, together with The Push Shoves and The Currents. They'll be on around 8.45pm. Entry is £6 on the door - but just £4.50 with the flyer posted on their Facebook event page (result).


Thu 21 - Pav Tav, Brighton - They're back in Brighton too, this time at The Pav Tav, a popular place to be during the town's annual Great Escape Festival.


Fri 22 - Their first trip to Wales will see Six Storeys High support the legendary 70s punk band The Members (me old man can remember goin' to see them in '78 and he's still got a clear vinyl copy of 'Sound of the Suburbs'.....yes he's that old) They'll be joined by Rat Scabies formerly drummer with punk pioneers The Damned (who he also saw back in the day) Tickets are a tenner, this'll be a wild one.


Sat 23 - Man On The Moon, Cambridge - The second last night on tour puts them in Cambridge, at The Man On The Moon (no small venue as Geno Washington will be playing there 18th August). They will be on supersharp at 8pm.


Sun 24 - The Hoppings Fair, Newcastle - They'll be delighted to end our 2012 tour in style, at Newcastle's Hoppings Fair. They're playing at 7.30pm at the Fair, at the Town Moor.

Here's  a live viewing of the six tracks 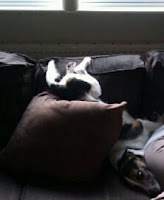 which will be available on iTunes from Monday.

Me I'm not going to ramble on about it like some up their own arse music bloggers (I'm a Jack Russell with an attention span of 20 seconds) I'm just going to say go buy it and go see them before you have to pay way more than you will this time round (and some of 'em are free FFS)!

Posted by Fruitbatwalton at 2:26 pm