White men can rap.....Hop up to Inverness and get yer Rocks off

One of the outstandingly different acts on over the two days of GoNorth is the highly acclaimed Stanley Odd who's got a new single out now, touring and was in the last 3 for a MOBO UnSung award.  Check out the excellent 'Get Out Ma Headspace' (sounds like me moanin' at the Old Man) below. As Harry Hill would say...."It's Bangin".

So I'm lookin' a bit miserable here 'cause it's rainin' cats 'n' dogs (ironically) here in St Helens so I'm stuck inside with nowt to do when in comes a bit of interesting Twitterage from those lovely people at Netsounds Unsigned tellin' me that the place to be is Inverness to check out the GoNorth line up and have a swatch at the Rockhopper Sessions.
For my part I'll be keeping my pointy little ears pointed in the direction of the Netsounds Podcast to keep me up on 'what's happening' (got them plugged in and lissenin' as I Blog.  Currently on is three Danish girlies called Nelson Can singin' Apple Pie.....yummy!

Next on the Netsounds Podcast is French Wives (who I plugged lately) doin' the brilliant Me Vs Me......did he just say You vs Me....hmmmm.....anyhoo......I digress......big up of the day might just be for West Coasters, Campfires in Winter.  Check out their excellent sounds below....it's free!  The guys are comin' on in leaps and bounds (me Old Man thinks they sound like the Proclaimers) as can be heard on their 2012 Album Demos either on their Facebook page or on Soundcloud.  Now if you're lucky enough to be up in Inverness today go and check them out ( for my part I'm stuck here waitin' for them to come somewhere near St Helens) or you can catch them on the 13th June at Bar Bloc in Glasgow, an' it's free.....are they mental!

Now the acts on show today are legion and therefor too many for me to mention here (mainly due to the fact that I'm a Jack Russell and therefor got an attention span of 20 seconds) so I'll check out with one last mention for local guys Naked Red.

Formed in 2007 as a 6-piece band including trumpet, piano, and additional female vocals, Naked Red gathered a steady following playing their own pop take on the more mainstream rock scene. After a year and a half of doing the pop thing however, it was time for a change.

Several changes in the make-up of the band saw singer/songwriter/guitarist Andy Forbes, along with fellow founding members Garth Coates (Bass) and Jamie Douglas (Drums) searching for the missing link to drive Naked Red in their next direction. Enter Tony Baxter, a time served session guitarist and master of the blues. This sound - brought to the band in the form of it's newest member - adds a great dynamic to Andy's songs, now fusing folk, funk, metal, and blues to create their very own sound.

The Band have now finished recording their debut E.P, recorded and co-produced under the watchful eye of Mop Youngson (Ex. Wolfstone, Old Blind Dogs) and is available from Imperial Music, Victorian Market, Inverness, at Naked Red gigs, or by contacting the band.
The band are currently in the process of gathering a new following, and are planning a major assault on local music scenes in 2012.  Go and catch them today ay the Rockhopper sessions, tell 'em I sent you!


Ok so I'm knackered (you try typing with paws) and off for a kip before I have to go get me Kennel Cough injections (bastard)....you guys enjoy the Rockhopper vibes! 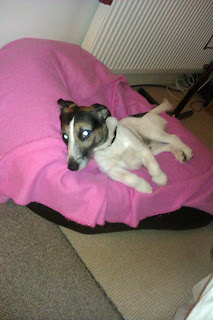 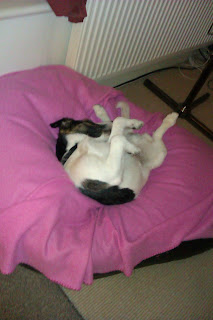 Posted by Fruitbatwalton at 10:40 am