We Came From The Sea.....drown in their sounds

So there I was this mornin' havin' me daily trainin' session 'cause the phone could go at any time with Cowden bein' in the semi's me bein' fae Cowdenbeath the options for gettin' a game are legion, but then it clicked that We Came From The Sea were due for a blogging.

They're a three piece from Glasgow who are achieving more and more acclaim with attention from Jim Gellatly on his Podcast.....and gig-wise.....they're playing The Garage in Glasgow on the 3rd November.....tickets are only £5 in advance or £6 on the door.....result!


Earlier this year overly verbose music bloggers Songs Heard on Fast Trains caught the guys playing a Glasgow gig and had these nice things to say.....

Finally, We Came From The Sea took to the stage – another trio, and a frighteningly youthful one at that. It was also pretty clear that they’d set up, promoted and managed tonight’s show largely themselves, a DIY spirit which has to be admired. Starting with a quietly building post-rock meander, they escalated things to the inevitable explosion which, when it arrived was a pleasant surprise with squalls of hollow but explosive guitar noise not unlike the Steve Albini-era Wedding Present. In the quieter sections there was just a hint of the grace and simplicity of Codeine too, which perhaps indicates that these guys have thought a little beyond the increasingly dull quiet/loud/quiet post-rock dynamic and know their way around the construction of a song. Lyrically, the songs were at times a little unsubtle and simplistic – but considerable time and effort certainly appear to have been invested in the music where they create a suspense and menace which the words just don’t quite capture yet. But then again, what do I know – the home crowd loved them, and with the guts to go it alone and the support of a growing fanbase, there’s not much to stop these guys from making a name for themselves.

Having previously played with other bands who have now fallen by the wayside, Paul Gavienas and David Simpson formed the post punk/rockish We Came From The Sea.  They began as a duo in 2009 and were joined laterly by Euan Thompson giving a bigger sound. 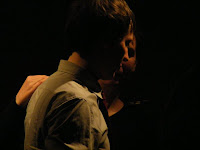 A personal favourite of mine is Antelope Arms available for a listen on My Space, it's a melodic slick and highly addictive instrumental track with a stonking bass line. They've released an EP Hunt Kill Run which recently featured on Dunoon Community Radio and is available either through the band on Facebook
or on SoundCloud.

For Adolfs Only (go listen and
you'll understand) by some old punk group called The Valves
who he was at school with (how many bands has he been at school with now) in prehistoric times.

Anyway have a listen yourself.....go like them on Facebook and pester Jim Gellatly into giving them more airtime.....tell him Ralph sent you.....

Posted by Fruitbatwalton at 2:59 pm